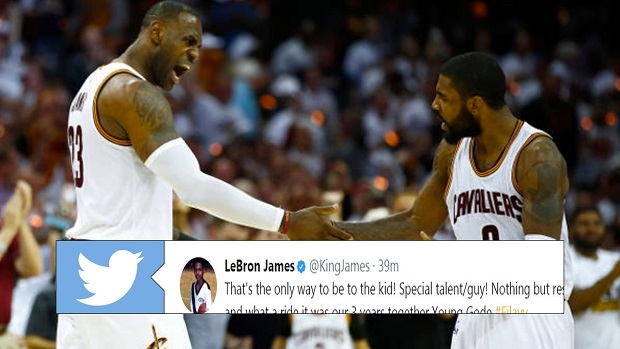 The Cleveland Cavaliers and Boston Celtics shocked just about everyone on Tuesday evening when they decided to swap Kyrie Irving for Isaiah Thomas, Jae Crowder, Ante Zizic and a first-round draft pick.

According to ESPN's Jeff Goodman, the @celtics and @cavs agreed to a blockbuster trade sending Kyrie #Irving to Boston. . More Details on TSN.ca.

Who do you think won the @isaiahthomas/@kyrieirving trade? #Celtics #Cavs

Not only were fans blown away by the blockbuster trade, but NBA players also couldn’t believe what they were seeing and hearing.

Damn dog, my guy I.T. Deserve better. I understand it's a business but that dude did a lot of the organization. Only going to get better!

Wooow. Who wins with that trade? 🤔

After Twitter settled down and everyone digested the blockbuster deal, LeBron James decided to show Irving some love for everything he did for the city of Cleveland with a perfect tweet.

That's the only way to be to the kid! Special talent/guy! Nothing but respect and what a ride it was our 3 years together Young Gode #Filayy https://t.co/wKYmYsmdgG

If you’re wondering what he’s referring into in terms of “That’s the only way to be to the kid!”, here’s the video that was attached to the original tweet.

Ok Cavs fans you know what to do.. pic.twitter.com/pZMI6SX8Hb

The two didn’t exactly see eye-to-eye over the past few weeks, but now that this mess is behind them they can both move forward and focus on next season.

A big THANK YOU from the entire organization & we wish you well in the next chapter of your career. pic.twitter.com/7PDqLJgMQ9

Irving was selected first overall in the 2011 NBA Draft by Cleveland and averaged 21.6 points, 5.5 assists, 3.4 rebounds and 1.3 steals per game in 381 games with the Cavaliers.