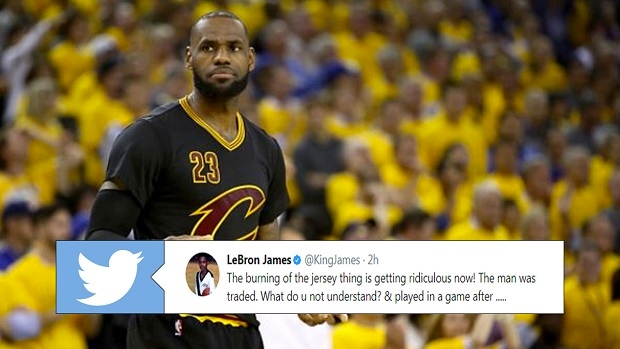 LeBron James didn’t take it personally when he saw the clips of fans burning his jersey when he decided to leave the Cleveland Cavaliers for the Miami Heat. He knew deep down that it was the decision he had to make for himself and his family and it worked out well for him. Now, James is standing up for the players who are getting the same treatment he did.

On Thursday afternoon, James went on a lengthy rant on Twitter telling fans to stop burning the jerseys after players leave, especially Isaiah Thomas’ after he put his heart and soul into everything he did for the organization including playing a playoff game the day after his sister passed away and spending his summer recruiting players.

Here’s what he had to say in his Twitter rant.

The burning of the jersey thing is getting ridiculous now! The man was traded. What do u not understand? & played in a game after .....

sister tragic death. Gordon Hayward paid he's dues as well and decided to do what's best for him and family. Put in the work, got better....

what u feel is best for your profession, love, family, happiness and continue to #StriveForGreatness🚀 #Salute

People react differently to things so you can’t exactly tell someone not to burn their jersey if that’s what they really want to do, but everything LeBron James stated in his rant is very true.

That's the only way to be to the kid! Special talent/guy! Nothing but respect and what a ride it was our 3 years together Young Gode #Filayy https://t.co/wKYmYsmdgG

Most likely everyone you know would leave their current job if someone else offered them more money for the same position, so how could you not expect a professional athlete to do the same thing? After all, they’re only human.