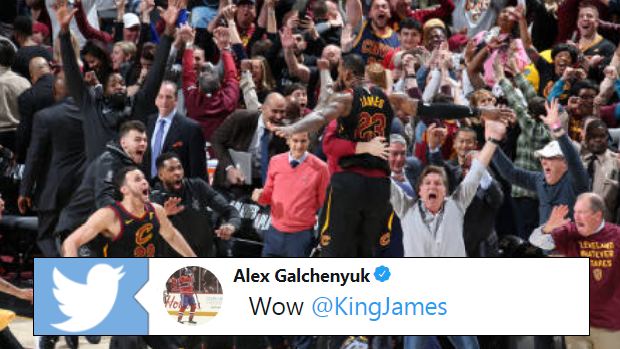 LeBron James has essentially been a one-man wrecking machine through the Cavs’ first round series against the Indiana Pacers, and tonight was no different.

The King averaged 32.5 points per night heading into Game 5, including a 46-point effort in Cleveland’s 100-97 Game 2 win. Tonight, James continued his absurd streak with arguably his best performance of the series. With three seconds left in regulation, LeBron received the rock and knocked a buzzer-beating trey from way downtown.

The most impressive play of the last five seconds was arguably the event that led to Cleveland’s possession. Before the shot, James denied Victor Oladipo with a massive block under the hoop.

Here is the LeBron James ahem block on Victor Oladipo prior to his game winner pic.twitter.com/vljIwEDLcA

After the game, the internet made a point of commending the three-time champion on the shot.

Kanye, I'm really happy for you, and I'mma let you finish, but LeBron James had the greatest performance of all time!

Tonight’s basket was reminiscent of another epic James moment which took place earlier in his career against the Orlando Magic in Game 2 of the Eastern Conference Final. Remember this?

LeBron will have to continue his dominant play if he hopes to appear in his eighth consecutive NBA Final. You’ve got to wonder how many more 40-point games he has in him but for now, he can enjoy what has arguably been the best performance of the playoffs.