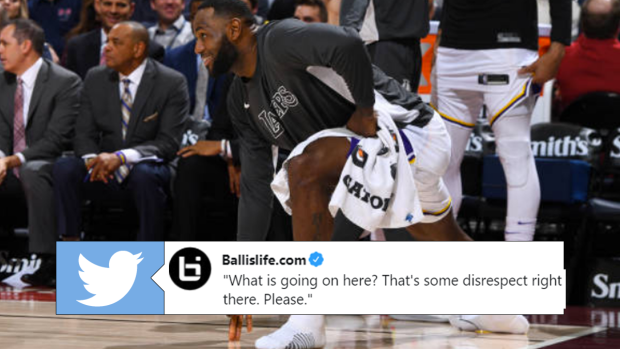 It’s LeBron James’ world, and we’re all living in it.

Usually this would be a flattering statement to make about someone, but on Wednesday fans were getting pretty upset about this sort of attitude. By now you’ve likely seen one of the most egregious non-calls in NBA travelling history committed by The King, but if not here ya go:

A missed call is a missed call. It’s frustrating, especially when they seem to be missed on some players/teams more than others, but they happen.

What’s really brought fans (and Utah’s broadcast announcers) a little closer to their wits end was some antics late in the game when LeBron was straight up on the court with no shoes, waving a towel around.

The Jazz's announcer was not happy about LeBron celebrating on the court with no shoes on. pic.twitter.com/6KygUZwQw9

In fairness, he wasn’t wearing shoes for a good reason. He gave the kicks to a young fan after he knew he was done for the day.

And this is why LeBron didn't have shoes on...pic.twitter.com/52kHjVIPDB

Regardless, fans believe that it’s a little disrespectful to be hopping around on someone else’s court while the game is still going. LeBron was trying to hype up some of the players that don’t get as much playing time, but he ticked off some people in the process.

Now I know why they call it Salt Lake City

Gtf off the court. This guy is so full of himself and the league will let him do whatever

That should be a tech.

He is literally a foot outside the paint at the end of the video. Everyone got stuck on the shoes comment. You’re blind if you don’t see it and think this is legal.

The announcer overreacted but LeBron James should have received a T for blatantly being on the court during the play. Look at him, he is past the three-point line. 😂😂. pic.twitter.com/ScCWlvLA5J