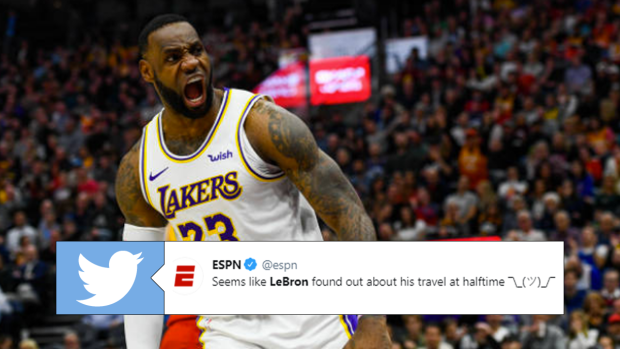 LeBron James got away with one on Wednesday, that’s for sure.

It was the walk heard all around the basketball world. Fans were outraged as they watched King James cross half court, proceed to essentially pick up the ball for a few steps, and then keep dribbling.

It was obviously just a mental lapse from James, but somehow it went uncalled by the game’s officiating crew.

Oh good god refs, I know it is LeBron... BUT COME ON 🤣pic.twitter.com/n2bz4M9AdK

Following the game, it was the question on everyone’s tongue. What the heck happened?

Lebron was asked what he thought of his carry/travel tonight against the Jazz.

“One of the worst things I’ve ever done”.

That’s not trying to beat around the bush. He knew he had done something wrong, and that he got away with it. He even actually told the officials up front that he had traveled.

Seems like LeBron found out about his travel at halftime ¯\_(ツ)_/¯ pic.twitter.com/ll8egROAHf