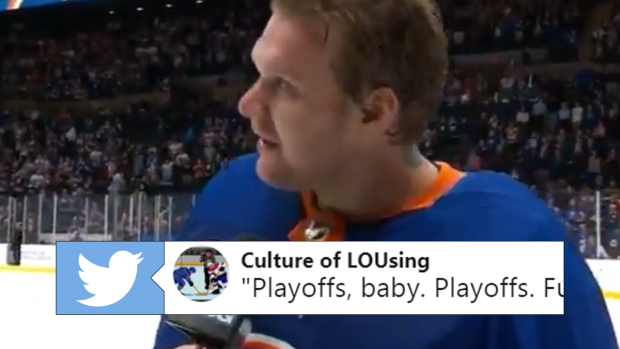 It’s pretty hard not to cheer for Robin Lehner right now. After he came out with his struggles through substance abuse and mental health issues, he came into this year and flipped it around. Along with Thomas Greiss, the play in the crease has been a huge part of the New York Islanders’ success.

On top of cheering for Lehner as a comeback story, you can also cheer for the Islanders as a Cinderella story (unless you’re a Leafs fan). After losing franchise player and team captain John Tavares, many thought the team would be in the cellars this season. It’s been everything but.

You think Lehner is grateful for his newfound mentality and his team’s trip to the post-season? In one short NSFW clip, you can see that he very much is.

The guy is FIRED up. It’s unclear if he thought the mic was going to pick up that trailing off profanity, but it makes the video almost a little more genuine.

Lehner is riding a stellar 0.928 save percentage to go along with a 2.19 goals against average.

I liked Lehner a lot. Happy for him and the Isles

Robin Lehner deserves every bit of this. What an incredible story

Love to see him happy and successful. So great, after everything he’s been though

I can't stop watching this! #Isles