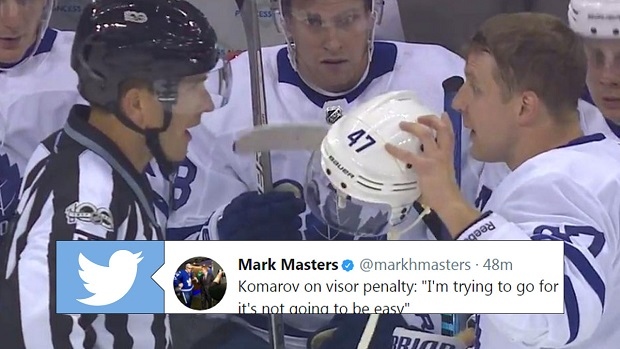 The Toronto Maple Leafs opened up the 2017-18 NHL season with a commanding 7-2 road victory over the Winnipeg Jets.

Early on in the game, Maple Leafs forward Leo Komarov received a very odd penalty as he was sent to the penalty box for two minutes for wearing his visor too high.

Leo Komarov gets a two-minute penalty for "equipment violation." Something w/ the helmet. Kadri and Rielly arguing on his behalf.

Babcock and Lamoriello appear perplexed as Komarov gets 2 mins for visor infraction. Teams knew this was going to be watched.

After the game, Komarov met with the media and one of the topics he discussed was his first-ever equipment violation penalty. Since his team was fresh off a massive 7-2 victory, you can bet Uncle Leo was in a pretty good mood.

Komarov on visor penalty: "I'm trying to go for the Lady Byng this year (smile) it's not going to be easy"