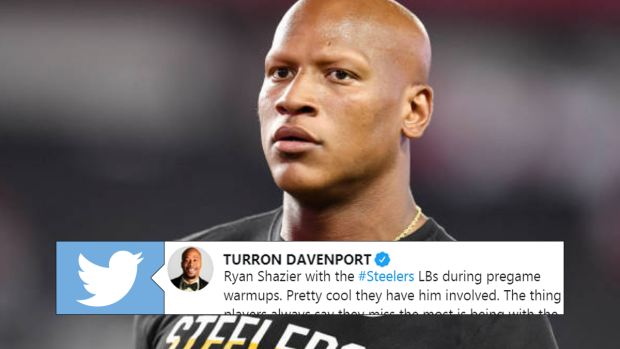 Ryan Shazier was at one point one of the elite linebackers in the NFL. Shoring up the middle of the field for the Pittsburgh Steelers, Shazier still had a lot of football left in him when devastation hit.

Closing in on a short route pass caught by Josh Malone of the Cincinnati Bengals, Shazier went in with his head down, immediately crumpling to the ground following the hit. From the Monday Night broadcast, it appeared he was unable to move his legs.

He was eventually diagnosed with a spinal contusion, and the extent of which he’d be able to use the lower half of his body was suddenly in question.

Over the last few months in particular, we’ve seen Shazier take massive steps in his inspiring recovery. On Sunday, Shazier was even on the football field tossing footballs around and looking much more spry than anyone could have hoped for less than two years after the injury.

Less than two years removed from a devastating injury to his spine, Ryan Shazier was on the field for warmups with the Steelers . (🎥: Twitter/TDavenport_NFL)

Well he is a long, long way from suiting up in pads, it is inspiring to see his recovery coming along so nicely.