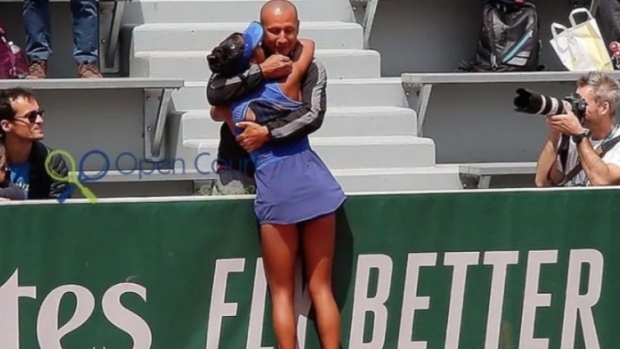 If you’re a Canadian sports fan, we’ll go ahead and assume that you’ve fallen in love with 19-year-old Leylah Annie Fernandez just like the rest of the country has.

Her fairytale run all the way to the Final at the US Open will conclude today against fellow teen Emma Raducanu, and Canadians are over the moon to see one of their own on one of the biggest stages in sports.

The entire country will be watching, mostly from home, as the youngster for Montreal looks to make history, and they’ll be joined by one surprising individual who’s also been watching the run from his couch – Layla’s dad.

Layla’s dad and coach, Jorge Fernandez, will not be in attendance at the US Open Final. He’ll be watching from home in Florida, where they now reside, and the reason why will be hilariously relatable to any athlete – superstitions.

Yep, Jorge is an extremely superstitious guy, and he talked to Mark Masters about his extensive list of ‘obsessive’ superstitions ahead of today’s match.

Superstitious Jorge Fernandez will watch US Open final from home

Jorge Fernandez has watched the entire US Open from home in Florida and he’s not changing his routine just because daughter Leylah Annie is in the US Open final. "I just can’t go and her lose because I will hate myself,” said Fernandez, who is incredibly superstitious and even uses a special shampoo on match days. "I can stay here and watch and if she loses it’s fine."

That’s so many superstitions, he might as well be the one on the court!

Hey, we don’t blame him though. If it’s not broke, don’t fix it, and Leylah is most definitely in her groove right now.