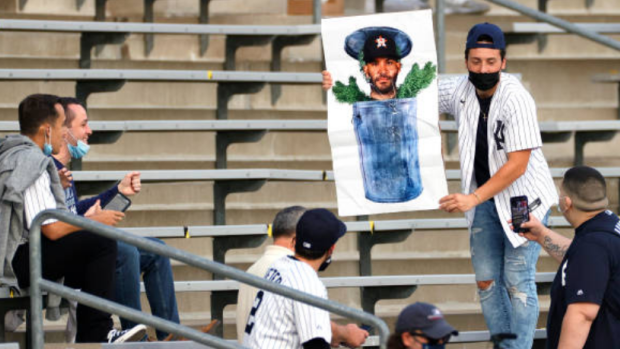 With 29 fan bases ready and waiting to let the Astros hear it, an unexpected hurdle appeared. COVID-19 did not allow for fans to attend games, and the ‘Stros got an abbreviated season without the boo birds there to give it to them.

Fast forward a year, and the fans are partially back. On Tuesday, we got to see the Astros visit the New York Yankees, one of the teams most affected by Houston’s cheating scandal.

The Yankees were beaten by the ‘Stros in the ALCS, and to make matters even more personal, Aaron Judge was beaten out by Jose Altuve for league MVP. When the Astros entered the doors of Yankee Stadium, we knew the fans were going to be pretty vocal about it.

Yankees fans get their first crack at Jose Altuve and the 'Stros. 😤 pic.twitter.com/xHbSIUId01

Yes, #Yankees fans are yelling what you think they are yelling at #Astros’ Jose Altuve pic.twitter.com/MXG0Y7Z9hD

Bah god, are those garbage cans next to the field?! #Yankees #Astros pic.twitter.com/Lci1JgTElN

The first casualty of the Yankees-Astros game: an inflatable trash can confiscated by security pic.twitter.com/Ip6fK6xVYz

Shoutout to the 10,000 people at Yankee Stadium tonight. You guys are crushing it pic.twitter.com/kY0d5U5O9V

one yankees fan ordered an oscar the grouch costume so he could bang a trash can while the astros are hitting pic.twitter.com/gNJeqlle0P

Loudest crowd of the year so far at Yankee Stadium: pic.twitter.com/I1TmdwgtOL

While the Yankees’ faithful was able to take out some of their anger, it’s a safe bet that the Astros haven’t heard the end of it. There’s no telling when they’ll finally be able to play a game without the hate raining down.