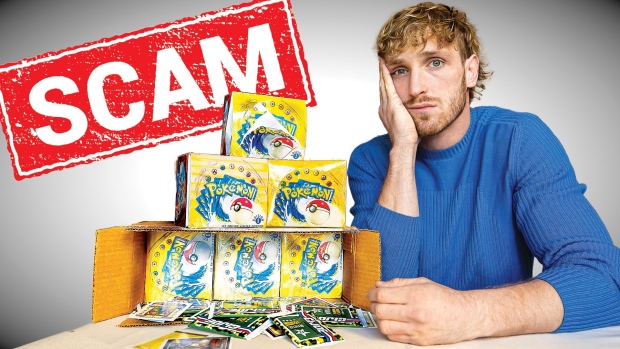 Getting scammed when you buy collector’s items definitely sucks.

Especially when you spent $3.5 million on cards that are perceived to be authentic.

Well, that’s a feeling Logan Paul is, unfortunately, dealing with as the first-edition booster boxes of the “ Pokémon Trading Card Game” turned out to not be what he believed he was buying.

After many online questioned that card’s authenticity, Paul confirmed on Thursday that they were fake.

Paul was prompted by PokéBeach to have them authenticated by the Baseball Card Exchange in Chicago, though unfortunately inside the boxes did not even contain Pokémon cards at all…

Yeah, a bit of a huge difference.

The cards were bought by a fellow collector, Matt Allen, who initially purchased the cards at $2.7 million.

And the internet, of course, had quite the reaction, including Milwaukee Brewers star Christian Yelich.

Any Yelich rookie cards in there?! https://t.co/hwmD8LpD76

This is crazy. Sorry to see this, but I’m thankful you’re able to share this with so many people for transparency.

But first and foremost, get that money back 😅

Logan Paul spent $3.5 million on fake Pokémon cards? BBCE verified it on camera in front of him too… pic.twitter.com/uYE5dsT0Z4

What an absolutely huge loss for Paul. Hopefully, this gives other collectors a bit of a lesson going forward and that Logan gets his money back!