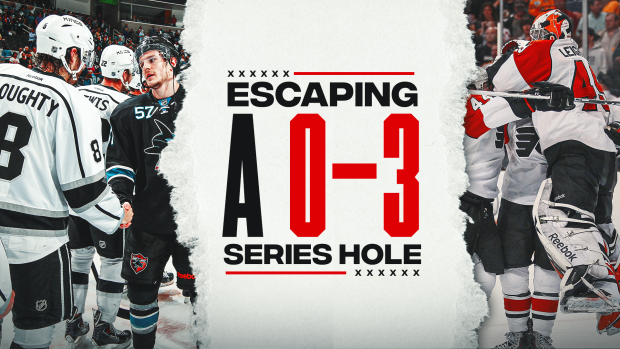 So far, the battles have been decidedly one-sided, with the Rangers and the Avalanche shutting out the Lightning and the Oilers, respectively.

On Saturday, the Avs pushed the Oilers to the brink of elimination by winning Game 3 on the road and securing a 3-0 series lead. Climbing out of a hole like that seems impossible, but it has been done before. In fact, of the 200 teams that have fallen behind 0-3, exactly four teams have managed to climb out.

History is not on the Oilers side. 😬

Can they become the 5th team to escape an 0-3 series hold? pic.twitter.com/QV7lIw7bhV

Here's who has done it before, and how they have ended up faring after the unlikely victory.

Escaping an 0-3 hole is always going to be dramatic, but even by those standards this series was something else. Here’s why:

Beyond that, this series had a very clear “TSN Turning Point,” if you will. After trailing by two goals in a do-or-die Game 4, the Leafs fought back to win 4-3, with Nick Metz scoring the crucial game-winning goal.

Most dramatically of all, Game 4 ended with multiple fines and a whole lot of violence, with Wings’ coach Jack Adams infamously punching referee Mel Harwood in the face. Harwood and NHL President Frank Calder had to be escorted from the rink by police, and angry fans littered the ice with concessions and other objects.

Adams was suspended for the rest of the series and Toronto would go on to win the Cup, only giving up a total of 4 goals over the span of the next 3 games.

1975 – The New York Islanders defeat the Pittsburgh Penguins in the quarterfinal.

The Isles coming back to defeat the Pens in 1975 also came with a very clearly-defined turning-point. His name is Chico.

His name is actually Glenn Resch, but everyone called the Isles then-backup goalie Chico when head coach Al Arbour decided to start him in Game 4 over then-starter Billy Smith.

Over the first three games of the series, the Pens managed to score on the Isles a whopping 14 times. Once Resch took the crease, they only managed to score 5 total goals in the remaining 4 games. That led to a ridiculous 0.969 saves percentage for the unlikely hero in Resch.

The craziest part about this Islanders team is that they very nearly escaped a second 0-3 hole in the very next round. Facing the eventual champions in the Philadelphia Flyers, the Isles battled back with three consecutive wins – two of which were one-goal wins – only to lose 4-1 in the deciding Game 7.

Considering how unlikely the feat of escaping an 0-3 hole is, it would have been truly remarkable to pull off the feat twice in the same playoffs.

2010 – Philadelphia Flyers defeat the Boston Bruins in the quarterfinal.

This series, in perhaps an unfairly specific nutshell, was defined by Simon Gagne.

After losing Game 1 and Game 2 on the road by one-goal apiece, the Flyers returned home to suffer a crushing 4-1 loss.

In Game 4, Gagne returned from a foot injury that kept him out of the seires to that point, and he would go on to score the overtime goal to keep Philly’s slim hopes alive.

After a Game 6 win at home, Gagne would score the game-winner halfway through the 3rd period of Game 7.

The Flyers would move past the Montreal Canadiens in the semifinal before losing to the Chicago Blackhawks in 6 games, with Patrick Kane scoring his famous Stanley Cup winning goal on Michael Leighton.

2014 – Los Angeles Kings defeat the San Jose Sharks in the 1st round.

After surrendering 12 goals in the first two games of the series alone, and another 4 goals in Game 3, Jonathan Quick turned things around in a hurry.

Quick went on to post a shutout in Game 5, while surrendering just one goal in both Game 6 and Game 7. The Kings offence, on the other hand, managed to solve Sharks goalies Antti Niemi and Alex Stalock, finishing the series off with 18 goals in the final four games.

The Kings would go on to defeat the Anaheim Ducks in 7 games, the Chicago Blackhawks in 7 games, and the New York Rangers in 5 games to win the Stanley Cup – their second title in 3 years.