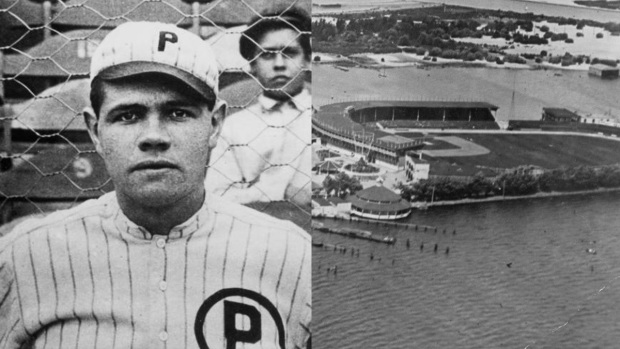 Here in the Great White North, we’ve been having a pretty good Jays off-season.

We’ve acquired some dimes to our roster. George Springer, Kirby Yates, and most recently Marcus Semien. Needless to say, we’re counting down the days until Spring Training.

But while we’re reminiscing on when we can next see some baseball in Toronto, we can’t help but go a bit further back in time to a historic point in not just baseball’s history but Toronto’s.

We’re talking about when Babe Ruth hit his first professional regular-season home run at Hanlan’s Point. You heard that right, Ruth himself started off a legacy right here on the Toronto Islands.

When I tell my kids stories about watching football and baseball games at Exhibition stadium, they look at me the way I’m sure I looked at my great uncle recounting Babe Ruth’s first professional home run at Hanlan’s Point Stadium on the Toronto Islands. #Argos #BlueJays #Toronto pic.twitter.com/6MMWqWQ2Nw

Jumping back to September 5th, 1914 at Hanlan's Point Stadium, the minor league Toronto Maple Leafs were facing off against the Providence Grays.

And before we jump forward, these Maple Leafs actually were formed before Toronto’s beloved hockey team, hey it’s a great name we can’t blame two teams for using it.

During the sixth inning, a 19-year old George Herman Ruth who would soon be known as the legendary “Babe” comes up to the plate.

There are two outs and two runners on base. Of course, Babe being the rockstar he was, crushed a pitch by the Maple Leafs and hammered it over the right-field fence.

But here’s the kicker. The home run ball was never found or at least recorded to be accounted for.

So where is this ball that should be in some sort of case on a gold pedestal?

Well, here are some theories.

The ball hit the water and fell to the bottom of Lake Ontario, the ball was found and put on display at a Toronto bar, and then there’s even speculation the ball was stolen from the old Canadian Baseball Hall of Fame down by Ontario Place.

Each one of them actually seems pretty believable.

Though we don’t have Ruth’s ball, there is a plaque down by Hanlan’s Point that sits just off to the right once you get off the ferry at the Toronto Islands.

A young Babe Ruth hit his first pro home run for the Providence Greys at Hanlan's Point. Many more followed for the Red Sox, Yankees, and the Braves. The Grays beat the Leafs 9-0 in that game. Here is our plaque for that moment in sporting history. #AlwaysReadThePlaque pic.twitter.com/TP6Yz7cSQ3

Just uh, make sure you don’t gear off too far because you may end up at Hanlan’s Point nude beach.