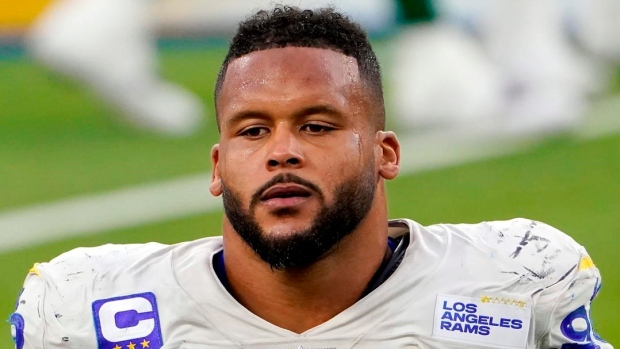 McVay said he isn't sure of the severity of the injury, saying Donald was still meeting with doctors and undergoing testing. However, McVay said the medical staff believes it is a high ankle sprain.

"Obviously we'll take the appropriate steps for Aaron in terms of how we move forward and what that means as far as his availability for this week and the weeks to come," McVay said.

Donald is the latest star Rams player to deal with an injury. Quarterback Matthew Stafford has missed two games this season while in the concussion protocol, and wide receiver Cooper Kupp is on injured reserve with a high ankle sprain. On Sunday, McVay announced wide receiver Allen Robinson II will be out for the rest of the season after a CT scan revealed a stress fracture in his injured foot.

The Rams also have dealt with significant injuries to their offensive line. According to Elias Sports Bureau data, Los Angeles is the only team in the Super Bowl era (since 1966) to use a different starting five-man offensive line combination in each of its first 11 games of a season.

McVay was asked whether he has considered to holding out several of his star players for the rest of the season because of the injuries the team has dealt with. He said he looks at each case differently, but that the team will be smart about each player's health.

"It certainly has been something that I don't think anybody could have ever predicted," McVay said. "And when it rains, it pours."

In 11 games this season, Donald has five sacks, 10 tackles for a loss, 11 quarterback hits and a forced fumble.

When listing injuries from the Sunday game, McVay also joked that he would be limited for the rest of the week after he took a hit to the side of the face when Rams tight end Roger Carter Jr. ran into him on the sideline.