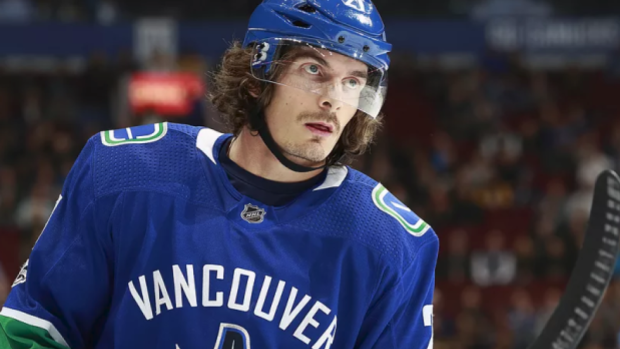 Since inking a six-year, $36 million contract with the Vancouver Canucks in 2016, Loui Eriksson hasn’t quite lived up to expectations. Through three seasons with the Canucks, he has totaled 32 goals and 76 points — for contrast, in his final season with the Bruins alone, he had 30 goals and 63 points.

Speaking to Swedish hockey website Hockeysverige, Eriksson says that his relationship with Canucks coach Travis Green has made things difficult. (The following translation via Google Translate.)

“I and the coach do not get together a hundred [percent] and it is difficult when I do not get the same trust that I received from all the other coaches I had during my career. Of course it is tough on that front.

... The alternative for me is to fight on. It feels like I'm still a good player in the league.”

Eriksson also says that, over the last few seasons, his time on ice has fallen off and that he’s been asked to play in more of a defensive role, both of which have also impacted his ability to produce points.

At 33 years old, Eriksson is certainly on the athletic decline, but naturally he still believes that he has something left in the tank. However, Jamie McLennan took an opposing stance on TSN's OverDrive, criticizing Eriksson’s focus in games.

'@jamiemclennan29 on Eriksson's comments to a Swedish hockey site, "I hope google translate has messed this up some how and he's saying, 'I need to be better and better focused."

'@jamiemclennan29, "I watched every game last season for the Canucks. This guy looked like a contest winner some nights. Maybe he's a lottery winner, I know he's making $6M a year. When you're scoring 10-11 goals in the last 3 years and under 30 points, this isn't on the coach."

'@jamiemclennan29, "I feel bad for Travis Green to be honest b/c had to hide him in the line-up most nights. This guys has to take a good hard look at what he's capable of doing. He's saying he needs more minutes, well it goes hand in hand."

'@jamiemclennan29, "How could Travis Green put him on the ice most nights when this guy was wearing a suit under his gear b/c he didn't want to break a sweat."

It’s unclear if this affects the likelihood that Eriksson will be on the Canucks next season, but he was already demoted from the first line to third-liner duty last season. The days of Eriksson as a 30-goal scorer may be over, but he’ll hope to salvage some of his value on the ice, whether in Vancouver or elsewhere.