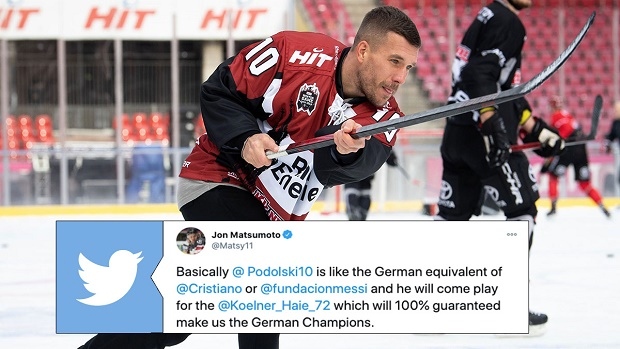 As a way to help Kölner Haie of the Deutsche Eishockey Liga (DEL) get through the COVID-19 pandemic financially, Podolski made a deal with fans that if they purchased 100,000 virtual tickets to the team’s games then he would join the team and make his hockey debut.

The team based out of Cologne, Germany, makes 80% of its revenue from fans at the games, so a season without fans in the stands would have crushed the franchise. But thanks to Podolski and the fans, they’ll get to keep things going into the 2020-21 campaign.

“I am extremely happy for the Haie, that we got the 100.000 tickets. I just want to say thank you to all the people and companies that helped us,” said Podolski, “Once everything is a little more calm we’ll sit together with the club to see how this continues. Whatever it will look like: I am looking forward to being a Haie player.”

Podolski hasn’t even made his debut yet and he’s already been offered the No. 10 from Jon Matsumoto.

Basically @Podolski10 is like the German equivalent of @Cristiano or @fundacionmessi and he will come play for the @Koelner_Haie_72 which will 100% guaranteed make us the German Champions. https://t.co/O4vI1UBmew

The DEL season is set to begin on December 17, which will be the first time the league hosts a game since March.