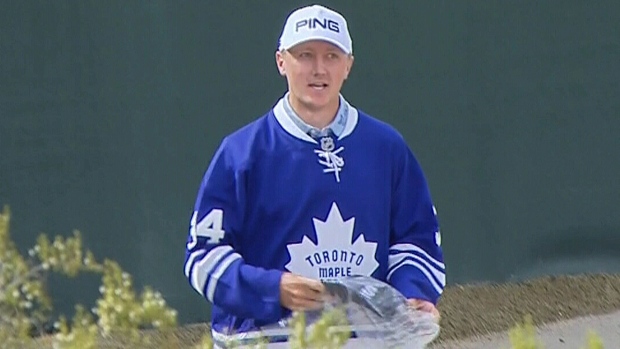 The 16th hole at TPC Scottsdale has a capacity of around 20,000 people, and is well known for it's enthusiastic crowd. It's been referred to as the most rambunctious crowd on the PGA Tour. On Thursday afternoon, the 16th hole got a big dash of Canadiana, as Canadian golfer Mackenzie Hughes came running through in an Auston Matthews Toronto Maple Leafs' jersey, and tossed hats to the fans in the stands.

Watch the video below:

Just about every Toronto Maple Leafs' fan has already gone out and bought a Matthews' jersey, so we're not surprised he owns one, but it's still shocking to see someone proud enough of a Leafs' jersey to run around on television with one on toss. The times they are a changing. And of course, Matthews is also from Arizona, so he knew the crowd would be pro-Matthews.