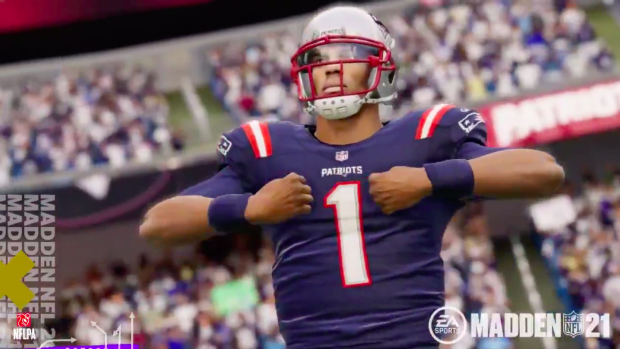 Whether or not Cam Newton can get his career going again with Bill Belichick and the New England Patriots is going to be an open question going into the start of the season, but it’s definitely a thought that has plenty of folks excited.

It isn’t every day that you can add a former NFL MVP into the mix — injuries or not — and while it’s been a few years since he was in his peak Superman form, Madden 21 gave us a first look at Newton in his Patriots jersey doing his signature celebration.

Madden 21 is going to be the first game in the series to release on the upcoming next-gen consoles, so Newton’s Patriots debut will come on the PlayStation 5 and Xbox Series X, if you needed another reason to get hyped.

There’s a lot of hype surrounding Newton and the Patriots in general, and while he’s far from a sure thing right now, there’s something about a former MVP and things always seeming to work out for the Patriots that has this feeling a little different than if Newton had signed anywhere else.

Cam Newton is off to New England 👀