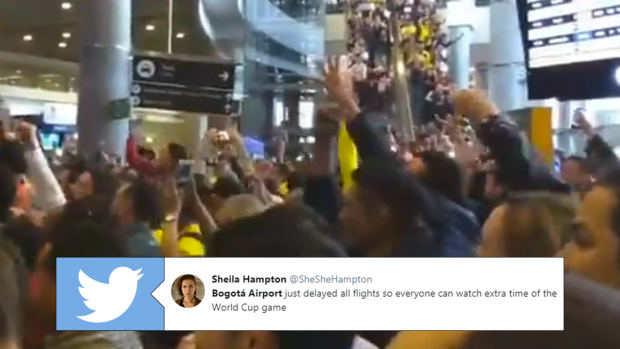 The World Cup is the biggest sporting event in the world, and when it rolls around every four years you can bet that there will be some crazy stories that emerge.

Following Colombia’s stunning late goal, that came in the 93rd minute of the game, the whole country wanted to watch. So much so that Bogota airport decided to literally delay every flight so that everyone could watch.

A friend just texted from the Bogota airport to tell me flights have been delayed so everyone can watch extra time.

Missed 20 minutes on the flight from Medellin to Bogota, but arrived just in time for extra time and penalty kicks--and one heck of a crowd at the #Bogota airport. Unfortunately #Colombia's well-deserved yellow cards did them in. Still, a great run for #LosCafeteros! #WorldCup pic.twitter.com/9VdOgwdmFk

I was told no flights at Bogota airport right now. #COLENG

Unfortunately for the patient airline passengers, Colombia couldn’t finish the job. They looked better than England in extra time, and they even had to advantage at one point in the shootout, but they went on to lose 4-3 in penalties.