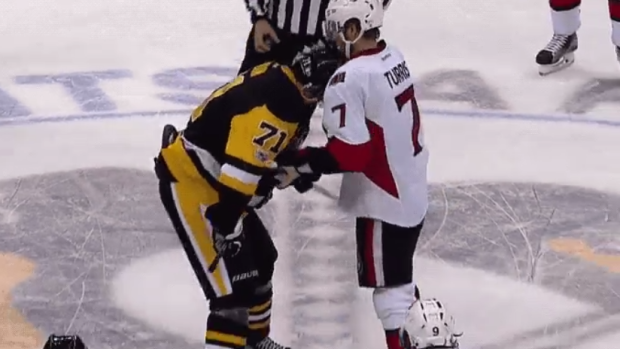 The best thing about playoff hockey is that players you may not expect to get into a heated exchange usually do.

Sure, there are the usual suspects like Ryan Kesler, but Phil Kessel and Jay Beagle getting into a war of words during the Penguins and Capitals second round series was unexpected.

In terms of on ice exchanges, hockey fans were treated to one Monday night during Game 2 of the Eastern Conference final between the Sens and Pens.

Late in the third before a faceoff with Pittsburgh up 1-0, Evgeni Malkin and Kyle Turris got into it, and it ultimately ended with Malkin being kicked out of the circle.

this is playoff hockey, folks pic.twitter.com/RL8KYGsOXm

The faceoff was pretty important considering it was a one-goal game and the Sens still had some time left, but in the end that obviously didn't matter as the Penguins held on to even the series.

The #Penguins even the series at one game apiece after beating the #Senators 1-0 in Game 2.

Safe to say, though, that Malkin versus Turris as a matchup to keep an eye on as the series shifts back to Ottawa for the next two games of the series.