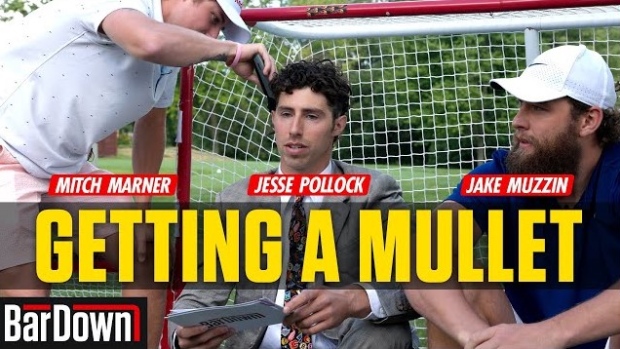 Ever since our own Jesse Pollock has begun loudly inserting himself into the hockey media landscape, one doppelganger comparison has continued to follow him around: Toronto Maple Leafs’ star Mitch Marner.

For Jesse, this is great. He one time even signed a piece of Leafs paraphernalia because, unbeknownst to him, the fan literally thought he was Marner. For Marner, it’s not so good. He has jokingly demanded that Jesse stop making the comparison, but recently he was given the opportunity to take matters into his own hands.

Close your eyes, Jesse. The barber is ready for your appointment!

Marner and teammate Jake Muzzin joined Jesse in his familiar hosting spot: on a hockey bag and in a hockey net. On the latest episode of In The Pipes With Pollock, Jesse asked the two Leafs players questions while they went to town on his curly locks.

The end result was, of course, a mullet. Not necessarily an even one, though!

You could tell Marner had a bone to pick as soon as he got the razer in his hand.

In the end, everyone had a smile, and that’s what really counts. Besides, Marner certainly isn’t a stranger to some ‘out there’ looks when it comes to his own flow.

Apologies to whoever had to deal with all that hair on the golf course.