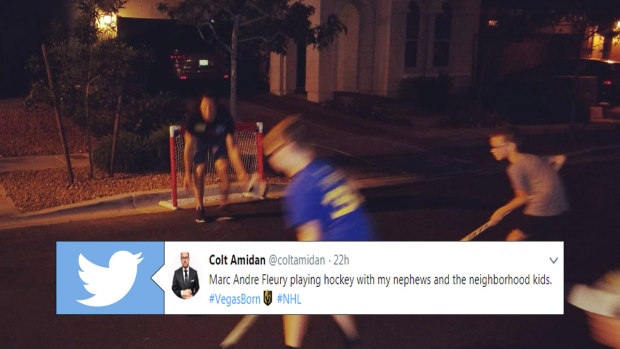 Marc-Andre Fleury was a fan favourite in Pittsburgh during his time with the Penguins and it didn’t take very long for the goalie to become a fan favourite in Las Vegas after he was selected by the Golden Knights in the Expansion Draft.

Although the team fell short in the Stanley Cup Final, fans around the league don’t look at it as a failure for the franchise as they accomplished so much more than people expected them to in their inaugural season and made a massive impact within the Las Vegas community. While the Capitals prepared for their first Stanley Cup parade in franchise history on Monday night, the Golden Knights goalie was back in between the pipes, only this time it was for a kids’ street hockey game.

Fleury has always been a man of the people and has been one of the most active players in the community ever since he entered the league over a decade ago. What's even better about this whole situation is one of the kids who got to play with him was so inspired that he decided he also wants to be  goalie.

Now my nephew is a goalie.... baseball mit and all. #VegasBorn #NHL #goldenknights pic.twitter.com/qRiB8FltWJ

The 33-year-old has one year left on his contract, but is eligible to sign an extension this offseason. However, he doesn’t plan on finding a new home anytime soon as he made it clear shortly after Game 5 that he wants to end his career in Las Vegas.

"Vegas has given me this opportunity to do what I love, and I wouldn't want to go anywhere else, and hopefully I can finish my career here."

Fleury: Certainly Vegas has given me this opportunity to do what I love and I wouldn't want to go anywhere else. Hopefully I can finish my career here. #VegasBorn 🌸