Borowiecki on Matthews showing up Sabourin: 'It was a little disrespectful, to be honest'

Ottawa Senators defenceman Mark Borowiecki hasn’t forgotten a non-verbal exchange between Auston Matthews and one of his teammates.

In case you missed it, Matthews, who has 212 regular season games under his belt, roasted Scott Sabourin without even saying a word on the ice. He essentially asked Sabourin who he was by simply looking at the back of his jersey. Sabourin had not played an NHL game up to that point of his career. 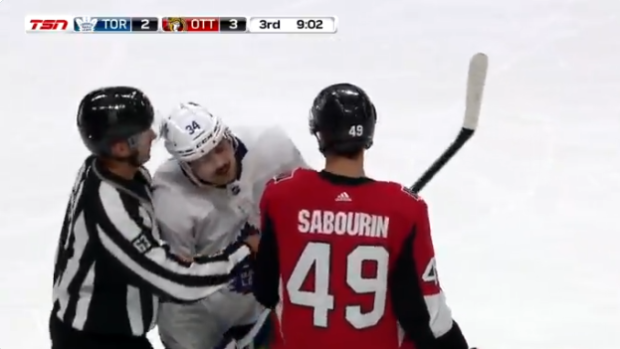 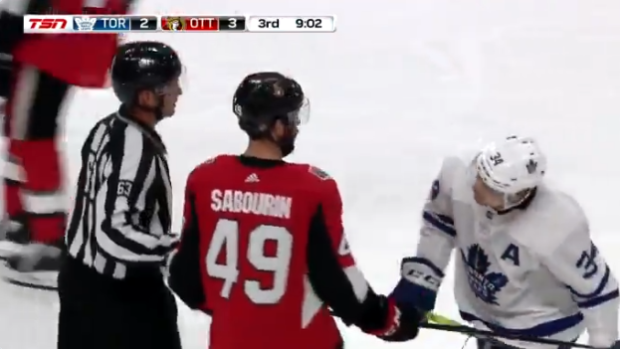 A veteran and resident tough guy, Borowiecki didn’t seem all that impressed with the 22-year-old’s actions afterward. He tossed out a friendly reminder that “we're not all blessed to have Auston Matthews’ talent” and questioned whether the 2016 first overall pick appreciates the kind of role Sabourin’s been forced to play throughout his NHL career.

Mark Borowiecki shared his thoughts on the #Matthews and #Sabourin exchange during the preseason.

Sabourin, 27, was informed recently that he cracked the Sens’ final 23 man roster. He’ll look to participate in his first NHL game which could ironically come against the Leafs during Wednesday night’s opening action. The Ottawa native has spent the past seven seasons in the AHL after going undrafted back in 2010.

“The support’s been overwhelming. I’m looking forward to the future here.”

Newly-signed Ottawa native Scott Sabourin speaks to the media ahead of tonight’s pre-season game against the Habs. pic.twitter.com/pZWFmLflgB

We’re sure Auston will know exactly who Scott is if he’s announced as a fourth-liner in the lineup tonight.