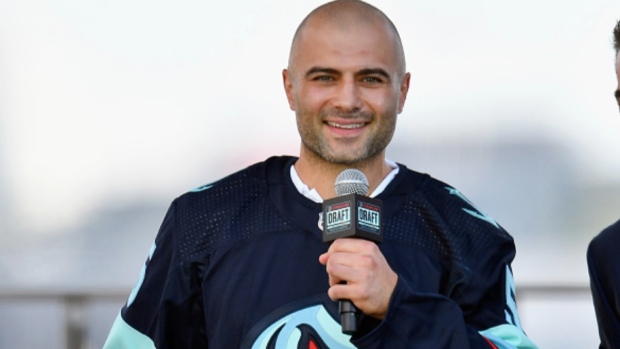 Mark Giordano is the kind of guy that aspiring hockey players should all look up to when chasing their dreams and modeling their careers.

The 37-year-old form Toronto, ON, has captained his Calgary Flames since 2011, been an NHL All Star on various occasions, is a Norris trophy winner, and has worn the Maple Leaf on his chest in international tournaments.

It’s obvious that his career has been wildly successful, one that most hockey-loving kids grow up dreaming of, but it didn’t always look like things would turn out this way for Giordano.

As many know, Giordano is the poster boy for being undrafted but chasing his dreams and finding success despite the odds. Giordano went undrafted in major junior, and started his career in the OPJHL before eventually getting noticed by the OHL’s Owen Sound Attack. Despite putting up around 50 points in two consecutive seasons with Owen Sound, Giordano again went without hearing his name called when the NHL draft rolled around. Mark enrolled at York University, ready to go to school, when he scored a summer camp invite from the Calgary Flames.

Obviously, the rest is history.

Last night, after 15 seasons in a Flames uniform, Giordano was selected in the Expansion Draft, and is now a member of the Seattle Kraken. Following his selection, the Flames made it clear how much they appreciate their captain, and how much they’ll miss him.

End of an era.

A leader off the ice, Gio's impact and community work will be felt for years to come in #yyc. pic.twitter.com/iSFo5KYk3j

"He has been the moral compass of this team for a long time."#Flames GM Brad Treliving talks about Mark Giordano being selected by the Kraken in the expansion draft. pic.twitter.com/MvIHyDBKCy

When he was selected, Giordano pointed out that it was his first time getting drafted, and it’s definitely still surprising to us that this guy was passed over so many times.

“This is the first time in my career I’ve ever been drafted, so thank you!”—37-year-old Mark Giordano, now a member of the Seattle Kraken pic.twitter.com/lde5q4FNVM

Giordano is definitely a guy you want in your locker room, and the Kraken have a good one in him.