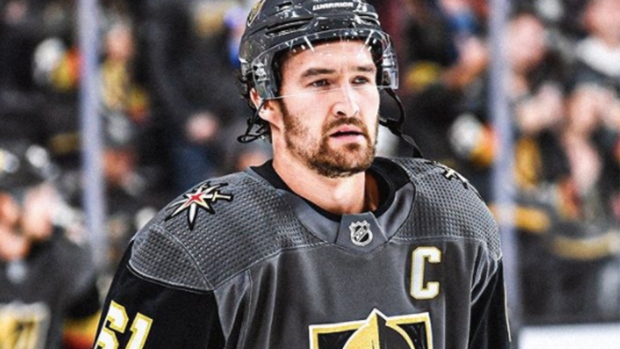 The Vegas Golden Knights will go down as one of the craziest expansion teams to ever join a league.

Their wild success over their first few seasons in the league has wowed fans, and the way they play and are able to shut down other teams’ attacks is so specific that it’s hard to match. The Golden Knights play a heavy-hitting, steady defensive game that doesn’t allow their opponents to get in front of their net, and it’s been a solid tactic that’s worked for them so far.

Another thing that’s worked for them so far is not having a captain, and until today, they’ve been the only team in the NHL (aside from Seattle) that’s never had someone don the ‘C’.

While there were more than a couple solid options, Mark Stone was announced as the team’s captain today, and the reaction afterwards says it all about how the organization feels about this guy.

We would just tell you who our first captain is...

but we’d rather have you C for yourself 👀#VegasBorn pic.twitter.com/icXmQvrClO

I’m extremely happy for Mark. We’re proud of him and think he’s going to do a tremendous job for our team. He’s a very respected player. He’s had nine full years as pro, he plays at an extremely high level every night.

"You see see the passion and commitment he has to being the best he can be. We had made the decision in each of our three preceding years to go with alternate captains only. This time around, we felt we had the obvious guy and this was the time to name a captain."

I don’t think Mark Stone’s a one moment guy. He's a guy that does things right every single day in how approaches games, practices and how he is with his teammates. I also love the emotion he displays on the ice. He’s invested in the game.

Stone had this to say about his new role:

Congrats to Mark, and we're over the moon to kick this season off!