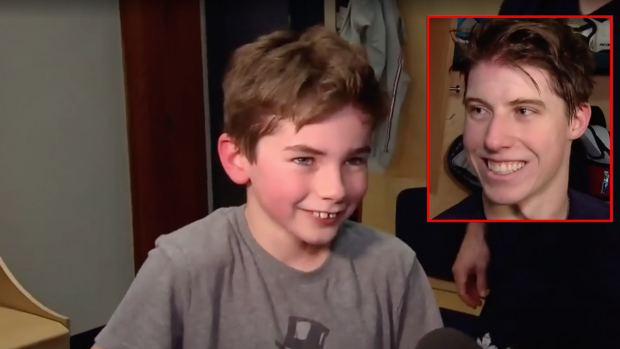 There are few birthday gifts better than being able to skate with your dad and favourite players at an NHL practice.

Sunday, Brody Marleau celebrated his birthday by taking the ice and playing with the Leafs during their practice and he was the star of the day on and off the ice.

After practice, Brody took the time to answer some questions and among other things, he admitted he's trying to steal Mitch Marner's girlfriend.

Marleau joked to his son Brody that the media wanted to speak with him & the nine-year-old didn't miss a beat actually volunteering to step before the cameras ... & he did confirm that, yes, he is trying to steal Mitch Marner's girlfriend https://t.co/Jn2VmAm9Ke

Wondering why Brody was asked about trying to steal Marner's girlfriend? This tweet from Christina Marleau earlier this month should clear that up.

@Marner93, Brody says that if you want this back, he can make a trade for it. You get the pass, he gets @stephlachanceee #MrStealYoGirl pic.twitter.com/8edjC4iJuI

To see Mitch having some fun with it, too, makes it even better and it's really cool that he and Matthews hang out with Marleau's kids and do things play mini sticks.

Patrick and his boys after dinner, before the epic mini stick battle. Ha ha for helping with our elf on a shelf @Marner93 @AM34 pic.twitter.com/SYA7n9tw8w

Safe to say Brody had an unforgettable birthday thanks to his dad and the Leafs.

One of Patrick #Marleau’s sons joined the #MapleLeafs at practice and really wanted to drop the gloves with @jgardiner272 😂 • • (🎥: Twitter/markhmasters)