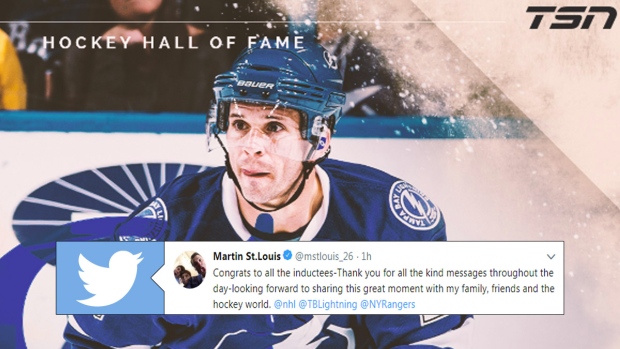 The six new inductees who will be enshrined at the Hockey Hall of Fame later this fall were revealed on Tuesday afternoon and the class of 2018 includes the likes of Willie O’Ree, Jayne Hefford, Martin Brodeur, Martin St. Louis, Alexander Yakushev and Gary Bettman.

Getting the official call from the Hall of Fame is a big moment for any athlete, so the Hall of Fame decided to record the official phone calls that Lanny McDonald and John Davidson made throughout the day. While every call was unique in its own way, one of the best receptions came from Martin St. Louis.

The moment St. Louis learns he's going to the Hall of Fame

“Woah what a phone call,” is a pretty simple reaction but that’s what made it one of the best ones of the entire day.

Congrats to all the inductees-Thank you for all the kind messages throughout the day-looking forward to sharing this great moment with my family, friends and the hockey world. @nhl @TBLightning @NYRangers https://t.co/DgqYKjEtiN

He also went on to mention that winning the Stanley Cup is his favourite single memory from his career, but just playing in the NHL in general makes for his all-time favourite memory.

St. Louis was in his first year of eligibility following his 16-year NHL career, but it was a pretty easy decision to give him the nod after scrolling past all the hardware on his résumé, which includes the Art Ross Trophy (2), Lady Byng Memorial Trophy (3), Hart Memorial Trophy, Lester B. Pearson Award, a Stanley Cup and an Olympic gold medal. On top of all the awards, St. Louis finished his career with 391 goals and 642 assists for 1,033 points in 1,134 games.