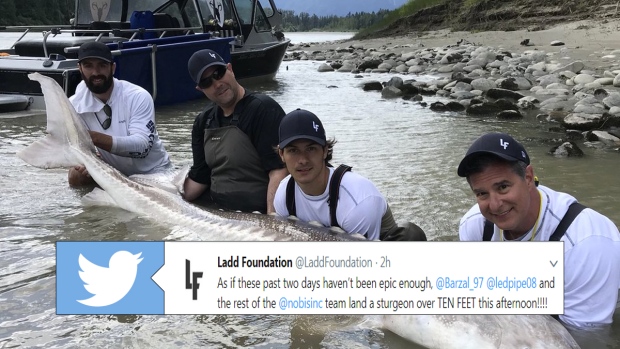 Andrew Ladd established the Ladd Foundation as a way to support a broad range of causes, mainly ones focused on youth and the environment, and he’s found some interesting ways to raise money for different causes.

Last year the 32-year-old started a charity fishing event through the foundation and it was such a big hit that he decided to bring it back this year. The people who participate in Fishing 4 a Cause get a two-day, three-night accommodation at the Fraser River Lodge and Tall Timber in Agassiz, B.C., have all their meals provided, get to go sturgeon fishing with an NHL All-Star, and get to take part in a wine/beer night. With proceeds going towards the Canadian Mental Health Association Calgary and the Fraser River Sturgeon Conservation Society, Ladd was joined by some of his past and present teammates on the second annual trip including Mathew Barzal, Dustin Byfuglien, Nick Leddy, Tyler Myers and Blake Wheeler.

Ladd and the guys made some memorable moments during the trip, especially when they managed to catch a sturgeon that was more than 10 feet in length.

As if these past two days haven’t been epic enough, @Barzal_97 @ledpipe08 and the rest of the @nobisinc team land a sturgeon over TEN FEET this afternoon!!!! They measured it, tagged it for the Fraser River Sturgeon Conservation Society, then watched in amazement as it swam away. pic.twitter.com/t35QgAXOEh

The Fishing 4 a Cause event is definitely one of the most unique charitable initiatives we’ve seen any athlete come up with over the years and it’s only going to grow in upcoming years.