Horvat: 'If we want to win in this league, we've got to be able to play a full 60 minutes'

It’s been a tough month for the NHL, but Wednesday night featured its brightest moment.

Just over two weeks ago, Vancouver Canucks goaltender Jacob Markstrom revealed his father had passed away from cancer in an emotional post on Instagram. The Swede didn’t play last night but in warm-ups, his opponent between the pipes on the other side, Pittsburgh Penguins goaltender Matt Murray, offered some good wishes in response to the passing. Murray also lost his father in January of 2018. 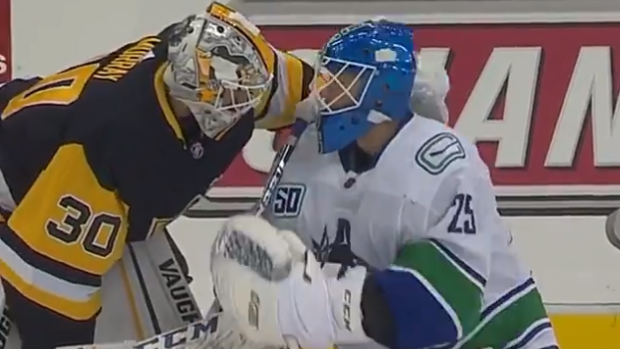 Dad you have taught me everything I know, I couldn’t ask for a better dad, friend and role model! I know you will always look down on us! The strength you have shown the last 6 months is unbelievable! I love you and Rest In Peace. FuckCancer

NHL teams have been hosting its hockey fight cancer nights throughout November. Markstrom made the announcement of his dad’s passing on the 10th ; the night the Canucks hosted their own in Vancouver.

It’s nice to see the goaltender is receiving support from both his own team and players around the league. A very classy move by Murray and one we’re sure Markstrom greatly appreciated.