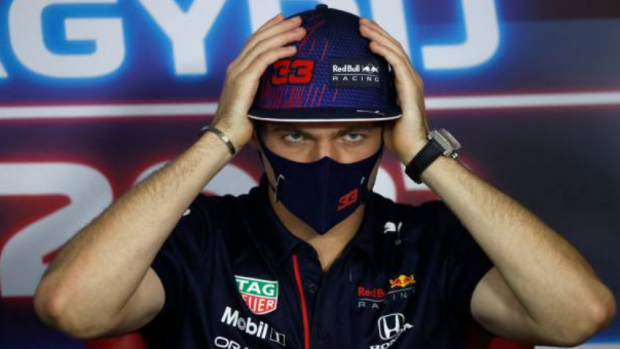 Max Verstappen was lucky to escape a crash at the British Grand Prix without a major injury. Shortly after the beginning of the race, Verstappen was clipped on the rear wheel by rival Lewis Hamilton, sending him barreling towards the side wall.

The crash left Verstappen’s car a complete mess, and Verstappen was taken to hospital for precautionary checks.

If you didn’t see the crash, here’s a view from the on-car cameras:

This 360º camera angle of the Hamilton/Verstappen crash last weekend is wild.

Many thought the crash was a result of Hamilton being too aggressive and putting Verstappen into a dangerous position. Without Verstappen challenging him for a spot at the top, Hamilton went on to win the race at Silverstone, and was celebrating the win on his home soil with a little extra energy.

Verstappen wasn’t happy with the gesture, calling the celebrations disrespectful on Thursday.

Max Verstappen has not backed down on his distaste for Lewis Hamilton’s post race celebrations:

“(It is) disrespectful if one guy is in hospital and the other one is waving a flag around like nothing has happened while you push the guy into the wall with 51G”#F1 #HungarianGP pic.twitter.com/dEXetF9xhW

He went on to talk about the Mercedes team in general, who seemed to make no effort to mute celebrations.

“That’s not how you celebrate a win, especially a win how they got it, that’s what I find really disrespectful. I would be upset with myself for a move like that and I would definitely not celebrate like that.” (via The Canadian Press)

Verstappen also believes the 10-second penalty Hamilton received was not severe enough, claiming that the speed difference should have been taken into account.

“I don’t think the penalty was correct. Especially with the speed we have, we are miles ahead of Mercedes with the speed. A 10-second penalty doesn’t do anything, so that penalty should definitely have been more severe.” (via The Canadian Press)

Hamilton responded to Verstappen’s criticism, claiming that he was unaware of Verstappen’s hospitalization. He also mentions that the win coming on home soil contributed to emotions running high at the time.

“It’s one thing knowing and then celebrating what happened, and there’s one thing not knowing and celebrating. I said I was not aware (he was in the hospital),” Hamilton said Thursday. “It’s my home Grand Prix ... Emotions were running high. It was not an intentional celebration (against him). I’m not going to hide my emotions.” (via The Canadian Press)