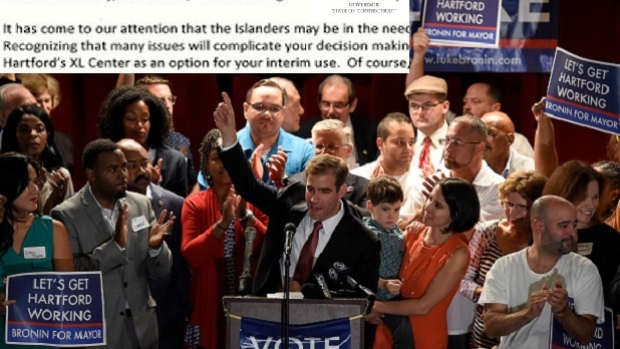 The New York Islanders have only been in Brooklyn for a short period of time, but if Brooklyn's Barclays Center can't work things out with the Islanders organization, it appears Hartford is interested in stepping in to help them out.

Mayor of Hartford Luke Bronin and governor of the state of Connecticut Dannel P. Malloy wrote a letter to Islanders owners John Ledecky, Scott Malkin and Charles Wang on Friday to offer a helping hand. The mayor and governor seem to be making Hartford's XL Center, formerly the Civic Center, available for interm use after the 2017-18 season, and implying Hartford could be a long-term solution.

Read the letter below:

There have been a lot of issues at the Barclays Center, but would the team really leave Brooklyn? And would NHL fans like to see the Islanders end up in Hartford? We know this kid would like to see it happen (Note: The young man in the following GIF is definitely no longer a kid).

One thing's for sure; there was no better goal horn/ song than the Whalers...

And one of our favourite artists, EPoole88, made some great Whalers art.

This dude meant business...before he up and moved to Carolina! I gotta bunch of requests for the whalers, just took awhile for me to get around to it. #whalers #hartford #hartfordwhalers #nhl #defunct #pucky

Keith Olbermann would be pleased to see a team back in Hartford.