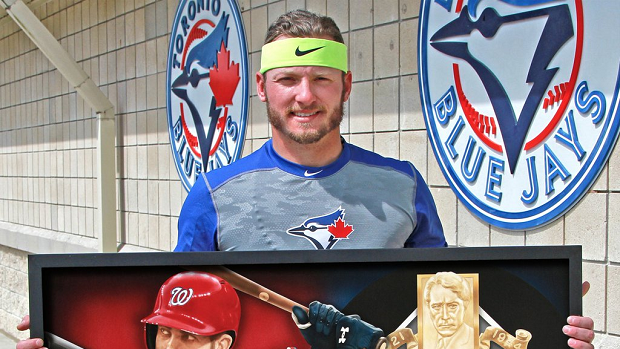 Vernon Wells is one of the most popular players in Blue Jays history and his connection to sports and Canada started at a young age.

For more than 30 years, Vernon Wells Sr. been creating works of art for players, card companies, posters, media guide covers and much more. According to his website, he has focused specifically on marketing to players in sports (Baseball most often) and has been very successful doing so. Of course, his son eventually making the majors couldn’t have hurt, but he had plenty of success before that.

In fact, his career started with the CFL and according to the Calgary Herald, he charges up to $20,000 per painting. In one of his most recent pieces, he created a painting to commemorate Adrian Beltre’s 3000th hit.

Adrian Beltre gets 3000th hit, then gets this V.WELLS original painting from Elvis Andrus and his teammates! #MLB #TXRangers #MLBPA pic.twitter.com/f8XbsMkTLq

His art reaches far beyond the internet though, as many players take the paintings to keep for themselves.

V does a painting yearly of the MVPs. First of them that sees it, usually wants it. Mike Trout got this one today! pic.twitter.com/ck1OBBmAMM

His work is even in some Upper Deck The Collectors Choice sets. They are also paintings and are some of the more unique works to ever make it into the trading card world.

So, how did this all start? Well, it was as a receiver, not an artist, with the Calgary Stampeders. It was a short-lived football career, as he separated his shoulder in the first game of his first preseason. However, shortly after his injury, the team heard he had talent and they asked him to draw the cover of their media guide.

And of course, he’s also done portraits of his own son as well.