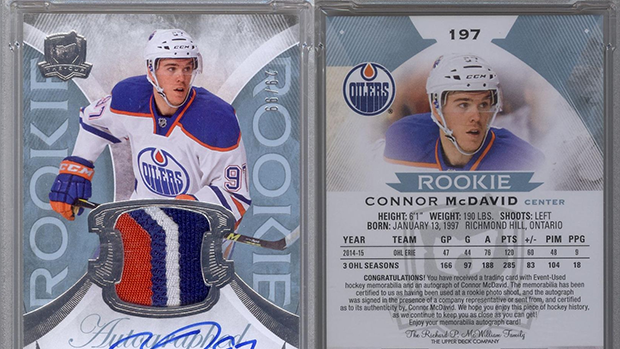 Connor McDavid is a generational player, so it’s no surprise that his rookie cards are a highly desirable item.

What may be surprising is just how desirable.

One of our followers, Matt Stark, point out to us that a particular Connor McDavid rookie card will sell in an auction on ebay today. According to the Ryan Cracknell of Beckett, the trading card website, the card that is selling in the auction today is the most valuable version of his rookie card on the market. Here is a brief description from their ranking last year:

“And here it is, the big one, the most valuable one of all, the 2015-16 Upper Deck The Cup Connor McDavid Rookie Card. Autograph, patch, tiny print run, high-profile release, brand affinity — the card literally has it all. Even though it arrived on the late side, that didn’t stop it from arriving with plenty of hype and high price tags.

Part of the reason why people are chasing this card is the prestige. There are several other cards that come with similar features and print runs that go for a fraction of what the actual The Cup Connor McDavid goes for.

For those chasing the best Connor McDavid Rookie Card, the search ends here.”

This card is currently auctioning on ebay for nearly $40,000 Canadian. 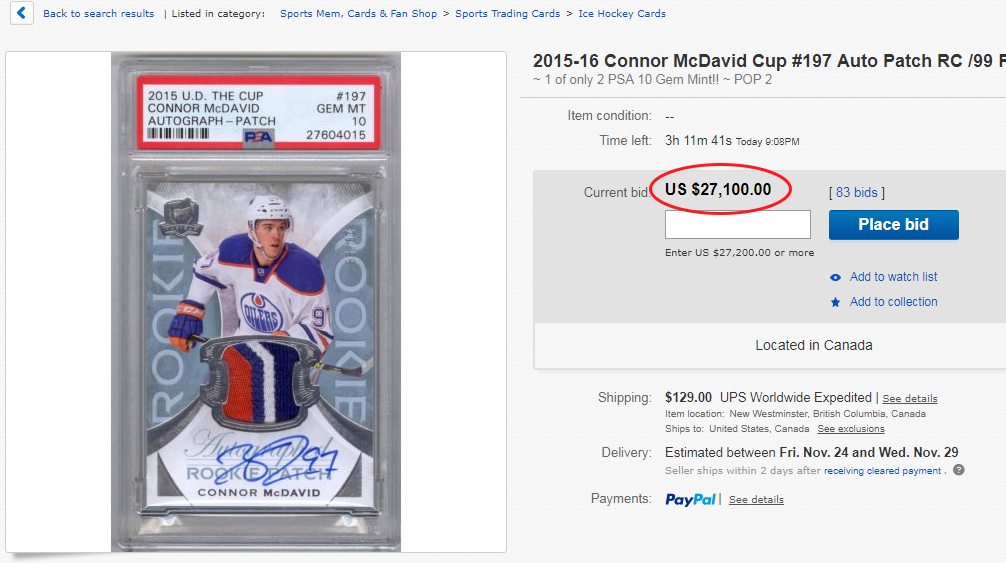 We’ll keep you posted as the card gets closer to selling. The closing time is tonight at 9:08pm ET. There have already been 83 bids and we can only assume that number is going to rise as the night goes on.

After 13 more bids last night, the card went up to $43,529.50 (34,100 USD). Last year, we saw a Greztky rookie card sell for nearly $600,000 Canadian, so if McDavid reaches the heights of being the greatest player in his generation, it's possible this could be a good investment.