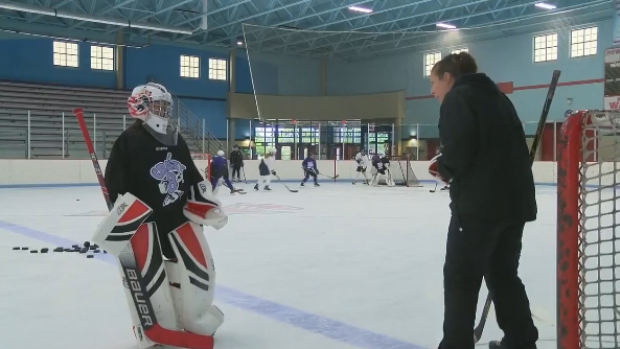 Goaltenders rely on their legs more than any other limbs or parts on their body.

Most netminders drop down in the butterfly to make saves, slamming their knees down flush to the ice to cover their five-hole. Once they're in that position, they rely on the power of the legs to push across the crease with their skates.

From kick saves to extending out the pad to stop a breakaway, to gliding across the crease, so much of a goaltender's performance relies on how strong they are on their skates.

For 12-year-old goaltender Lily Rosenthal, she unfortunately didn't have two legs to help her stop pucks, but that didn't stop her perseverance of playing the sport she loved.

Adopted from Northwest China at age two and a half and born with fibular hemimelia, Lily had no fibula bone in either leg. As a result, her feet were clubbed and she had missing toes. Her parents had to make a difficult decision of amputating both of them a year after her adoption.

Since her older sister was a goalie, Lily wanted to follow in her footsteps, so she had prosthetic legs made so she could become a goaltender.

"Once the cast was off and she was fitted for prosthetics, she was off and running." Laura said. "If she wanted to try something, we didn't stop her. I don't think we could."

When Lily's parents registered her for hockey camp in Hartland, Wisconsin, Lily told her parents not to tell the school she had two prosthetic legs.

"I just wanted to surprise them."

It doesn't matter where and how you stop the puck, all that matterS is if you make the save, whether it's with your pads, glove, blocker, chest, or any part of your body.

For any goaltenders out there who need a little extra motivation at times, just remember Lily's story of perseverance and courage.