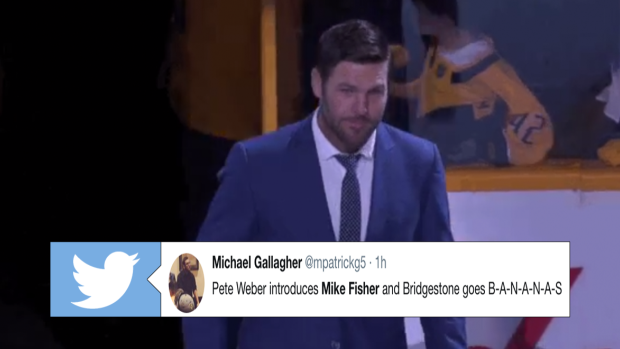 The Nashville Predators went on a magical run last season that ended on home ice when they lost to the Penguins in Game 6 of the Stanley Cup final.

#Predators fans let #MattMurray have it with their chants in Game 3. Expect more of the same tonight.

Nashville was the centre of the hockey world and the city was put on the map as a true hockey city during the playoffs as fans saw first hand the passion Predators fans had for the sport and their team.

Although the end of their was heartbreaking, the team made history during the playoffs as they became Western Conference Champions for the first time in franchise history.

Tuesday night, the Preds played their first home game of the season and they raised their first Western Conference Championship banner to the rafters with the help of former Nashville captain Mike Fisher.

Fisher got a massive standing ovation from the Predators faithful when he came out on the ice, and rightly so as he left it all out on the ice before retiring.

All of Nashville when Mike Fisher walked onto the ice for the banner raising ceremony tonight #Preds pic.twitter.com/P41SRhxZ0I

Btw. What an ovation for the Capt Mike Fisher. Timing is everything in life and he walked away at the perfect time.

Thank you @mikefisher1212 for ensuring I cry tonight.... #raisethatbanner #preds

Wow. What a moment to have Roman Josi and @mikefisher1212 unveil the @PredsNHL Western Conference Champions banner with the team! Chills. pic.twitter.com/R0UYo3Z78v

I’m not crying seeing Mike Fisher walk out, you are! #Preds

Mike Fisher is walking onto the ice. Pretty cool moment, getting a massive ovation. #Preds

Mike Fisher in the house. And getting a standing O. #Preds

Mike Fisher is in the house and gets a huge ovation.

After the banner raising ceremony, Fisher was asked if he felt the itch to play again and he gave a very honest answer:

I asked Mike Fisher if he has gotten the itch to play at any point. He said "tonight." pic.twitter.com/RV7HL2chUo

We're sure hockey fans everywhere miss seeing him play, but it seems like he's enjoying retired life, too.