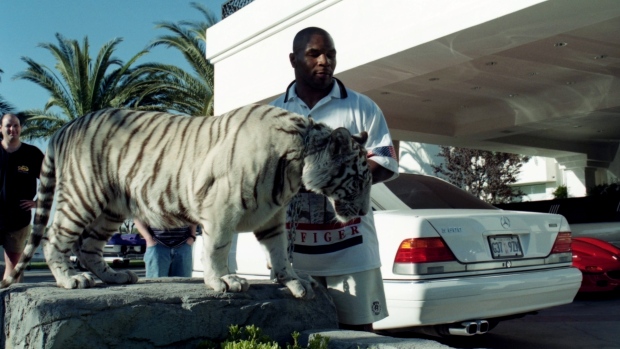 As one of the most recognizable figures in all of sports, Mike Tyson is known not just for what he’s accomplished in the boxing ring, but also his public life outside of it. Case in point: His ownership of three Bengal tigers as pets, in the heyday of his stardom.

Appearing on the Joe Rogan Experience podcast, Tyson talks about he was unprepared for the lifestyle that came with his sudden success in his 20s, and acquired his tigers by realizing he could trade luxury cars for them.

“So I’m in prison, I’m talking to my car dealer at the time and he has some cars that belong to a friend of ours, and he’s discussing, ‘If he doesn’t pay for these cars, I’m going to sell these cars to somebody and get some horses.’ I said, ‘What, you can get horses, and trade horses in for cars?’ Because I had a lot of cars, I’d probably get some horses too. And he said, ‘Yeah man, you can get cougars, lions, tigers.’ I said, ‘You do?! Can you get me some tigers?’” —Mike Tyson

The lifestyle of the rich and famous: We really cannot relate. Although that’s hardly new knowledge for anyone who has watched The Hangover, which memorably featured Tyson as well as one of his tigers.