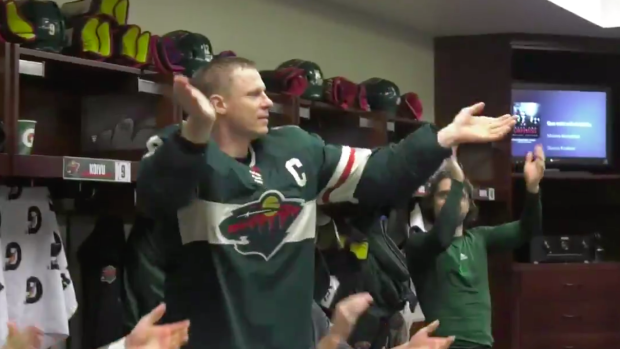 There was no better way for Mikko Koivu to celebrate his 1,000th game in the NHL than with a win, and he willed it into existence himself with the shootout winner to beat the Stars on Sunday.

Just as the Wild lifer would have it. The bench reaction to his winner was incredible, and his teammates celebrated with some good old “Danza Kuduro” in the locker room.

“It’s been a great day, but to finish with a win… makes it that much better.”

Mikko Koivu capped a day of milestones by scoring the shootout winner as the @mnwild extended their point streak to nine games (6-0-3). #NHLStats pic.twitter.com/Hfu6E1BsfP

Mikko Koivu gets a standing ovation from the crowd at Xcel Energy Center for his 1,000th game. pic.twitter.com/7heM5pRVBd

Koivu notched his 700th career point to boot, with an assist in the second period. He was going for all of the milestones!

Hilariously, Koivu almost didn’t factor into the shootout at all, until Bruce Boudreau relented on his big day.

Boudreau on Koivu in shootout: "I wasn’t going to put him in bc he hadn’t scored in the shootout in like 2 years, and I figured he was rested bc he didn’t play in overtime, and it was his day, so all the stars were shining in the right direction, so go out there and win it."