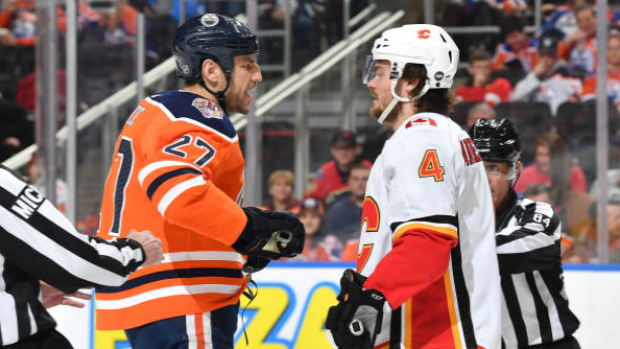 When Milan Lucic signed a seven-year, $42 million with the Edmonton Oilers back in July 2016, he envisioned himself being an Oiler for the foreseeable future.

Three years into the deal, Lucic found himself with the Oilers' provincial rival, the Calgary Flames, after an off-season move that saw James Neal head north on Highway 2.

During his time in Edmonton, Lucic would've never pictured himself playing for the Flames. So when he signed a Oilers jersey that was eventually framed by a fan, he made sure to take a little jab at the Flames.

Yes, this is a Milan Lucic jersey with “Flames suck” written under his signature. 😂😂 | 🎥 by @MasonMilgate81 #oilers #flames #nhl pic.twitter.com/CsreiJzo73

In 3 games this season with the Flames, Lucic has 0 points, 26 PIMs and is a -1. Neal, meanwhile, is leading the league in goals with 6 in just 3 games, the same amount Lucic tallied last year in Edmonton over 79 games.

James Neal is off to a hot start with the Edmonton Oilers. 🔥👀 pic.twitter.com/RaKoExl6ae