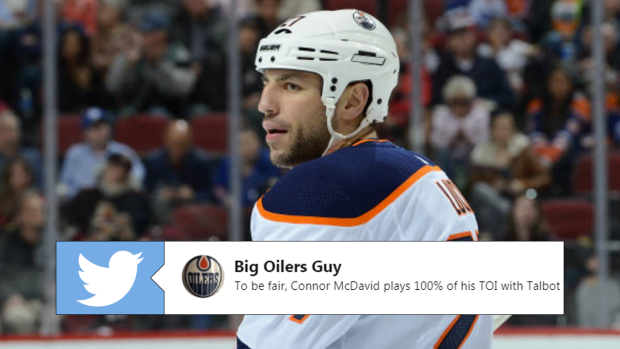 While the big man has dealt with being banged up here and there, he has played in each of Edmonton’s 65 games this year, so clearly injuries have not been the issue. If he manages to finish the year healthy, he is on pace for 39 points. For a man that has not scored less than 40 points in a year since 2009-10 (excluding 2012-13 when he only played 46 games and still managed 27 points), it is safe to say that this pace is well below what was expected from Lucic.

Part of the reason Lucic’s numbers look so abysmal is because of a recent rough patch that has him putting up even less offensively than usual. Over the last 18 Oilers games, dating back to January 20, Lucic has only recorded one point – a secondary assist on Iiro Pakarinen’s 3rd period goal.

That’s bad, but it’s even worse when you consider that he plays on a first line and first powerplay unit alongside one of the greatest players in the game today, Connor McDavid. With Oilers’ goalie Cam Talbot picking up an assist on McDavid’s 2nd period goal on Saturday night, Talbot has matched Lucic’s point total over the rough stretch – and he’s technically played in three less games.

With his assist on Connor McDavid’s goal, Cam Talbot ties Milan Lucic in points in their last 17 games.

Lucic has struggled to pot the puck, but he's still been throwing his weight around. It could be argued that he has settled into a different role as protector, although the numbers are way worse than last year when he was playing with the same superstar.

While rough patches happen in long careers, sometimes they are so bad that they end up with these strange and eye-opening comparisons. Hopefully for the Oilers’ faithful Lucic can start putting some points on the board – Talbot may be after his first line spot.

To be fair, Connor McDavid plays 100% of his TOI with Talbot as well. #mcdavidbump