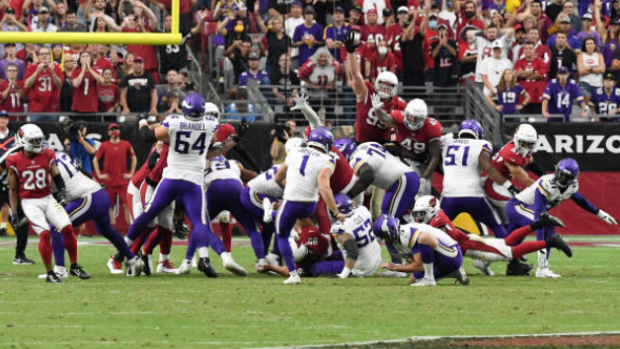 Death, taxes… and the Minnesota Vikings missing important kicks in the waning seconds of the game.

The Vikings have been the victim of painful defeats coming from the boot of their place kicker. From Blair Walsh’s badly missed chip shot that would have led the Vikings to a wild card victory over the Seattle Seahawks to Gary Anderson’s infamous missed kick during the 1998 NFC Championship game, no Vikes fan feels comfortable when the kicker comes out to seal it.

During Week 2 action, the Vikings once again found themselves a made field goal away from victory over the Arizona Cardinals. Unfortunately for the state of Minnesota, it went just how many bitter Vikings fans have come to expect it to: badly.

A missed FG gives the @AZCardinals the W! #AZCardinals pic.twitter.com/O790oAlz32

Greg Joseph had made two field goals on the day, but when it mattered most he wasn’t able to deliver under pressure.

This is heartbreaking, no doubt, but there is nothing more heartbreaking about this than listening to the Minnesota radio call in which the commentator fully thought that the kick had successfully split the uprights.

AS CALLED ON VIKINGS RADIO: pic.twitter.com/11794IWphj

Heartbreak, over the radio.