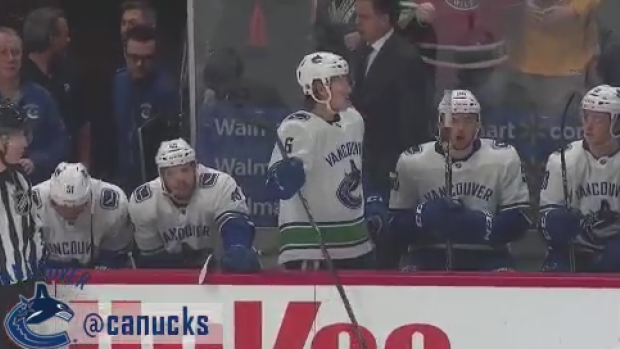 On Saturday night, Winnipeg Jets captain and Minnesota product Blake Wheeler lifted his arms and did the Viking clap in support of the Minnesota Vikings during the Jets game against the Wild at the Xcel Energy Center.

#BlakeWheeler joined in on the #SKOL chant the #Wild fans were doing Saturday night ahead of the #Vikings’ game Sunday. . (🎥: @fsnorth)

The Vikings went on to win their game against the Saints thanks to a last second catch courtesy of Stefon Diggs from Case Keenum.

The Vikings weren’t the only Minnesota team in action on Sunday. Across the way from U.S. Bank Stadium, the Minnesota Wild were in action taking on the Vancouver Canucks for a little mid-afternoon puck.

For Minnesota sports fans, there was just a little problem. The Canucks and Wild game got underway right as the Vikings and Saints tilt was finishing up. Conflicted fans of the Wild and Vikings were given an option to watch either hockey or football.

You can’t fault Wild fans for wanting to see the conclusion of the football game, so the arena staff inside the arena did the fans a favour and threw the game on inside of the concourse, and the reaction to the Vikings last second touchdown was absolutely priceless.

During their game against the @canucks, @minnesotawild fans celebrated the @vikings last second win in the concourse of the #XcelEnergyCenter. . (🎥Via: @minnesotawild)

What a moment. Out on the rink, Canucks rookie Brock Boeser, who hails from Burnsville, Minnesota, couldn’t help but notice the close score.

Upon finding out about the Diggs touchdown and the Vikings win, Boeser let out a little celebration by tapping his stick on the boards while standing on the bench as the jumbotron acknowledged the big victory.

Wheeler, meanwhile, shared his thoughts on the big win and reflected on his time as a Vikings fan.

Keenum and the Vikings will be taking on Nick Foles and the Philadelphia Eagles next week for the NFC Champioship, with the winner advancing to the Super Bowl.

The matchups are set! Which teams will be in the #SuperBowl? 🤔