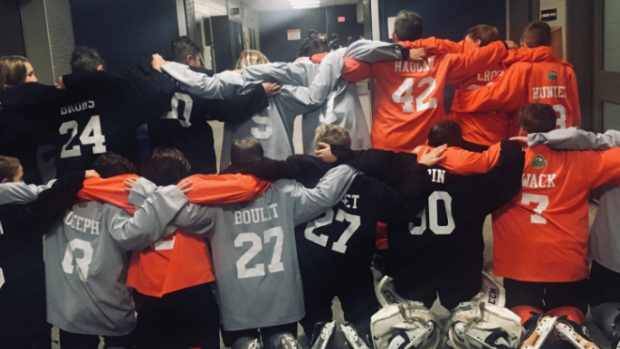 In the midst of an incredibly emotional night in Humboldt, TSN’s Craig Button shared one minor hockey team’s special tribute to the Humboldt Broncos on Twitter.

This is from my buddy @RobFacca who works for the @NHLBlackhawks His brother is the coach of an Atom team in London. This is what they did to honour @HumboldtBroncos today in practice. Names of the Broncos’ players on their nameplates. #HumboldtStrong pic.twitter.com/nb0xsC4Lvo

With the #HumboldtBroncos season home opener tonight we will honour them this hockey season with their names on our practice jerseys! 💛💚#HumboldStrong #HockeyFamily PlayingForTheBoysAndDayna pic.twitter.com/eZ9TMQwinK

The Atom level hockey team based out of London, Ontario, had the last names of the victims of the Humboldt tragedy printed on the nameplates of their practice jerseys.

This wasn’t the first time a hockey team went out of their way to honour the Broncos. In the aftermath of the crash, it was commonplace in rinks across the nation, and even across the world, to pay tribute to the boys from Humboldt.

A heart wrenching scene as members of the @SCBroncos & @MJWARRIORS skate out to centre ice and pay tribute to Humboldt Broncos with a moment of silence.

So many have friends, former teammates, hockey brothers who played on that team. #PrayforHumboldt #whl pic.twitter.com/AJi4LjXxrd

...a moment of silence .... an Elder came out to pray with the Paddle Prairie Pens and the Kainai BullHorns today in honour of the Humboldt Broncos...#hockeyfamilies@AbNativeHockey @HockeyAlberta @HockeyCanada @CityofEdmonton @doniveson Photo courtesy: Kyla Crow pic.twitter.com/1c67dzciEc

Moment of silence at Air Canada Centre before #Leafs vs. Canadiens for Humboldt Broncos. Teams making a donation in honour of the accident’s 15 victims. pic.twitter.com/W0ETc2Cag0

Here in Sweden, before our game. The Swedish tournament organizers held a one minute moment of silence for the Humboldt Broncos of SJHL. - Paul Mentuck via Facebook. #PrayersForHumbolt pic.twitter.com/BVBvSkfEQh

It’s clear that the impact of the tragedy has been felt in rinks worldwide, and that #WeAreAllBroncos.