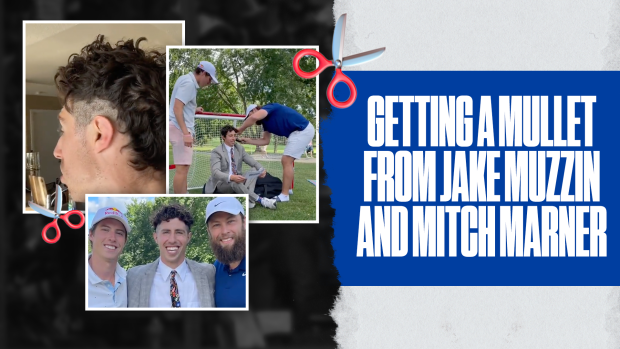 Jesse and other members of the BarDown crew attended Zach Hyman’s annual charity golf event on Monday where a variety of NHLers and other in the hockey community gathered. As has been the case in years past, Jesse took the opportunity to chum around with the players in another edition of “In The Pipes.”

Jesse has featured John Tavares, Freddy Andersen, and others in previous editions of “In The Pipes,” and this time he had another couple Leafs; Jake Muzzin and his reluctant lookalike Mitch Marner. Luckily for Marner, he was able to make Jesse look objectively less like him in this video.

Muzzin and Marner each took a turn in shaving off Jesse’s hair, leaving him with an all-too-familiar mullet. The guys made sure to take some friendly shots at Jesse in the process, both physically and verbally!

.@Marner93 and Jake Muzzin gave @jpolly22 a mullet on a golf course 😂. Thoughts on the new look?! ✂️

Huge shoutout to the @ZachHymanGolf tournament for hosting us 🙌 pic.twitter.com/GWTTGJYpuW

Don’t even want to know how much hair got stuck in the fabrics of Jesse’s suit.