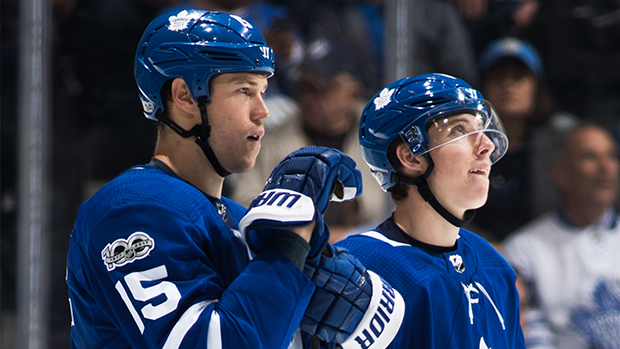 Mitch Marner is one of the most popular Leafs players of the new wave that all started last season, and his relationship with Matt Martin has been of particular interest lately.

Yesterday, he put up an Instagram calling out the father/son nicknames that Leafs Nation has given these two since their relationship became so strong. In that theme, it appears Martin and Marner were going to embrace the gag even further with their Halloween costumes. Unfortunately for Leafs fans, their girlfriends put the kibosh on, according to TSN’s Leafs reporters.

Marner reveals that he and Martin planned joint Halloween costume: Dr. Evil and Mini Me ... but their girlfriends kiboshed the idea

Connor Brown came up with the idea. Marner and Martin tried to work girlfriends in as fembots but they understandably weren't into that

Not to worry, photoshop to the rescue.

Last year, the Leafs had some pretty great costumes too. We’re sure they’ll come up with something creative. Some teams have already started with their Halloween parties, but these were some of the Leafs’ costumes from last year.