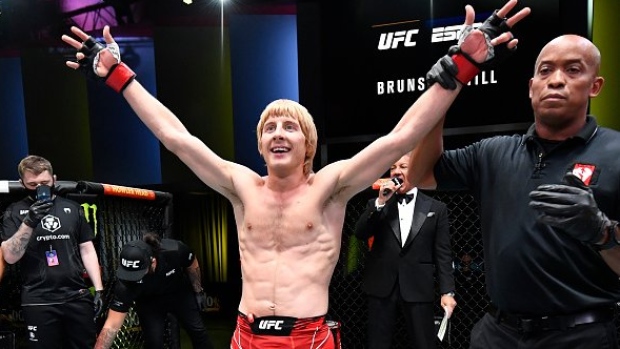 Professional wrestling's brightest up-and-coming star has been butting heads with one of the top prospects in MMA on social media -- and it could turn into a real-life confrontation.

"I wouldn't be shocked if the AEW world champion shows up on Dec. 10 in Vegas," MJF said.

The beef started when Pimblett, nicknamed "The Baddy," commented on an MJF interview video clip on Instagram. In that clip, MJF talked about how dangerous professional wrestling is, calling it even riskier than MMA. Though pro wrestling is obviously pre-determined, the punishment to athletes' bodies is very real, while MMA is a legit, mixed-rules fight.

Pimblett, and several other MMA fighters such as former UFC lightweight champion Eddie Alvarez, commented on the Instagram video. Pimblett called MJF a clown, with some expletives mixed in, and MJF went back at him with insults.

"I'm sick and tired of people talking about pro wrestling as if it's some f---ing stunt show," MJF, 26, told ESPN. "The fact of the matter is Paddy 'The Prima Donna' Pimblett would not last two seconds in a professional wrestling ring with me. Maybe not even one."

MJF, who mocked the pronunciation of Pimblett's last name throughout the ESPN interview, said pro wrestlers get chronic traumatic encephalopathy (CTE), have been paralyzed from the neck down and even killed during matches, with the latter two not happening very much in mixed martial arts.

"This fat, moon-faced prick, Will-from-Stranger-Things-looking a--hole dollar store Conor McGregor decided he needed to chirp up and say, 'Oh, wrestling is fake,'" MJF said. "Let me tell you something. We are real fighters. They are prima donnas."

Pimblett is 3-0 in the UFC with three finishes and has a massive fan base with over 2 million followers on Instagram. MJF just won the AEW title last Saturday night, beating Jon Moxley at the Full Gear pay-per-view.

MJF, who is from Long Island, New York, said he could confront Pimblett in Las Vegas next month, but "is Paddy the Baddy even worth my time?" If not, MJF said Pimblett should meet him next year when AEW goes to London. Pimblett is a Liverpool, England, native.

"Pro wrestling is a dangerous, dangerous sport, and there is no one more dangerous than MJF," Friedman said. "I can assure you when we come to London in 2023, if Paddy shows his face, he's going to find out that a Scouser [a native or inhabitant of Liverpool, England] is no match for a Long Islander. Because I'm better than him and he knows it.

"There's a target on my back at all times. Like I said, if 'Paddy the Baddy' thinks he can aim at that target and hit it, I am more than game. More than game to knock that guy out."