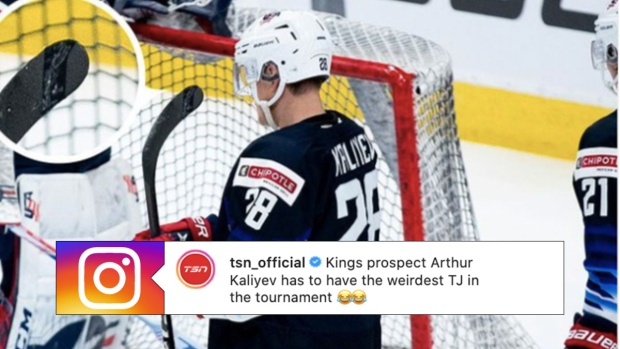 What a tape job.

Tape jobs are a pretty personal part of a player’s game, and they’re one of the things that hockey folks spend a long time perfecting to ensure that they're juuuuust right.

While every player’s end result and process is a little bit different, tape jobs usually end up looking pretty uniform right across the sport.

Notice how we said usually.

We thought we’d seen it all with the Bruins’ David Pastrnak’s tape job, which you might be familiar with.

So impressive that Pastrnak was able to record 5 points in one playoff game despite having the most disgusting, embarrassing, piece of garbage tape job in the history of organized hockey. pic.twitter.com/T5PeSH3ID2

Yup, that’s it! We assumed Pasta would always have one of the weirder tape jobs in hockey history, but highly touted Senators prospect and the third overall pick of this year’s draft, Tim Stützle, showed up to the World Juniors to steal the ‘most bizarre tape job’ title.

The German native has been fun to watch so far this tournament, but one of the things that fans couldn’t help but notice was his seriously strange tape job.

Seriously…what is that?! So imagine our surprise when we noticed that Stützle might not even have the weirdest tape job in the tournament. Enter, Team USA’s Arthur Kaliyev, who’s already signed by the LA Kings and is a total stud in the OHL for the Hamilton Bulldogs.

Known around the game for his wicked shot and goal scoring ability,  Kaliyev has a weird tape job of his own.

Do you know how weird a tape job has to be to make Stützle’s look normal?! Check out the knob on that thing!

They say ‘if it ain’t broke, don’t fix it’, and the weird tape jobs have definitely been doing the trick for these elite players so far. Maybe we should try them out, honestly!