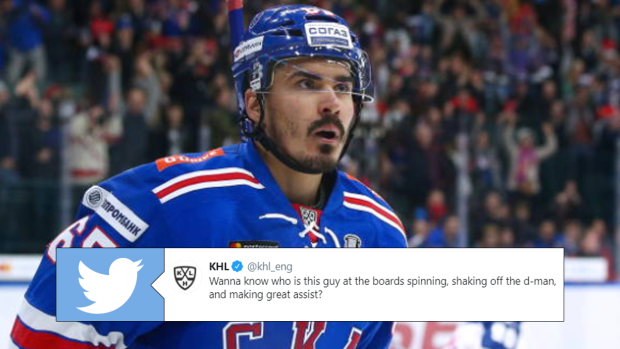 Saying that, it doesn’t always work out. Guys like Rick DiPietro, Patrik Stefan, and Alex Daigle come to mind when thinking of more recent 1st overall flops, but none quite as recent as Edmonton Oilers 1st overall pick in 2012, Nail Yakupov.

Yakupov played in 350 NHL games, managing to score 62 goals and 74 assists. Scoring a high of 33 points in three seasons with the Oilers, he was traded to the St. Louis Blues for a guy that never even played in the NHL (Zach Pochiro). After a brief stint with the Colorado Avalanche, Yakupov took his business to the KHL.

Every once in a while, you hear his name resurface. It did so recently when he pulled off an absolutely filthy move of his opponent before dishing a precise apple that his teammate easily deposited into the net.

Wanna know who is this guy at the boards spinning, shaking off the d-man, and making great assist?

While we’re not expecting Yakupov to make the jump back to the NHL anytime soon, it’s nice to see him flash some of the talent he was originally drafted for.