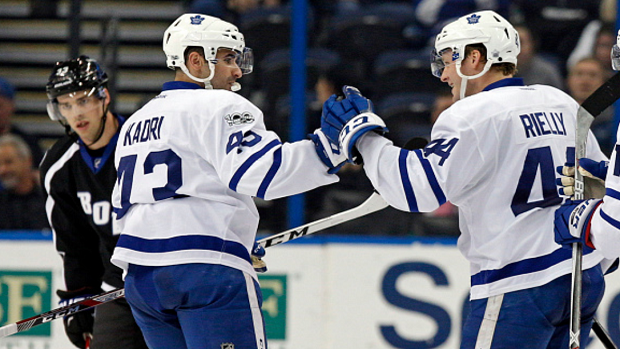 Ever since THAT hit on Boston’s Jake DeBrusk that resulted in a potentially season-ending suspension, Leafs’ forward Nazem Kadri has been laying pretty low.

Though he’s been practicing with the team, he hasn’t been available for any commentary in regards to his thoughts on the hit, or his subsequent suspension.

Mike Babcock on Nazem Kadri's suspension: "It's just like an injured player. He's not available. The rest of us are moving on and ideally we'll play well enough, Naz will join us again."#Leafs have refused to make Kadri available to media until after his suspension ends.

While DeBrusk has since given his views on the situation, Kadri hasn’t yet been afforded the opportunity.

Jake #DeBrusk clears the air on his hit on Nazem #Kadri

While he still hasn’t spoken on the suspension, tonight, Kadri voiced his opinion on a different subject.

The Norris Trophy finalists were announced today, and Leafs’ fans were very quick to notice who they thought was an omission: Morgan Rielly.

Brent #Burns, Victor #Hedman and Mark #Giordano are this year’s finalists for the #NorrisTrophy. Thoughts? 🤔

Apparently, fans weren’t alone in that thought, and Kadri took to Twitter for the first time since the controversy to voice his displeasure about what he thought was a total snub.

@mriles4 got snubbed for the Chucky Norris award. Monster year was a slam dunk for my guy. @NHL might need to consider reviewing that one.... A nomination at the very least

We’ll see if Kadri having his teammates back will give them some extra fire to win Game 7, so that he can see the ice again this season.