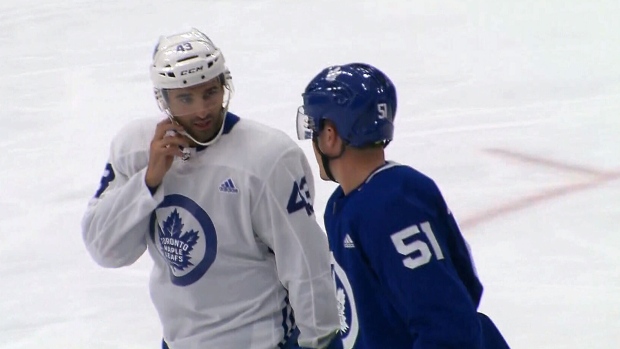 Training camp is a time for bubble players to make their mark on a coaching staff and hopefully lock down a roster spot or be a call-up consideration from the AHL team.

As camp progresses, and once the bag skates are out of the way, rosters will usually be split into two different teams. To balance out the rosters, the veterans will be split evenly. Sometimes in camp, we see tempers flare and guys mix it up after a big hit or a board battle. The competitive juices get flowing and emotions can get the best of players.

At Sunday’s Maple Leafs scrimmage in Niagara Falls, Jake Gardiner and Nazem Kadri were placed on opposite teams in the blue and white scrimmage. Kadri retrieved a puck and tried to give it back over to a teammate before Gardiner came bowling in and ran Kadri from behind into the boards.

The two skated together and shared a couple words before laughing it off before Josh Leivo came over to put Gardiner in a headlock.

Afterwards, Kadri joked with the media that Gardiner should be suspended for the hit from behind on top of the penalty he received.

"He was trying to justify the hit," Nazem said with a smile. "It was shocking, to be honest with you. He possibly could've gotten five games for that in the regular season." https://t.co/KukP2wQ6E0

Jake Gardiner plows Nazem Kadri into the boards, gets a warning head lock from Kadri's linemate Josh Leivo. Both Kadri and Leivo out for the Gardiner PP.

It’s good to see Kadri was in good spirits about it, given how the hit could’ve been a lot more serious.