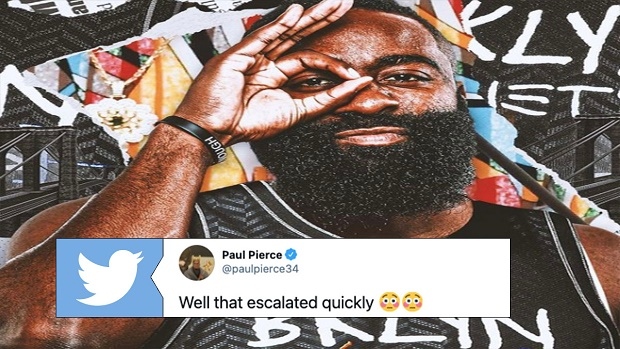 The Beard is going to Brooklyn!

After making it very clear he wanted out of Houston and was done with the Rockets, James Harden was finally traded on Wednesday afternoon as the 2018 NBA MVP was dealt to the Brooklyn Nets in a blockbuster deal.

The rumoured landing spots for Harden were narrowed down to Philadelphia and Brooklyn on Wednesday morning, and it became official hours later. As you can probably expect, the reaction from basketball fans were all over the place with Harden now joining forces with former teammate Kevin Durant and Kyrie Irving and getting the out he wanted for so long.

When #NBATwitter can't look away from the James Harden news: pic.twitter.com/QZ3nK5PxXY

A live look at the NBA right now.... pic.twitter.com/kdYIJqY2TC

Right before my nap huh . Most entertaining sport in the business

Reunited teammates James Harden and Kevin Durant are 2 of the 4 players to win 3 consecutive scoring titles since the merger, along with Michael Jordan (2x) and George Gervin.

Harden and KD have accounted for 7 of the last 11 scoring titles entering this season. pic.twitter.com/Y6ILTrFOoV

“You’re about to be the starting center on a team w KD, Kyrie, and James Harden” pic.twitter.com/Si7zECwGV6

Nets just traded for James Harden. Now they have KD, Harden, and maybe Kyrie in the starting lineup. That’s scary! 😳

Two of the most premier scores of all time on one team @KDTrey5 @JHarden13 . Still mavs in 6 @dallasmavs

It quickly turned into a three-team trade as the Cleveland Cavaliers got involved and acquired Jarrett Allen and Taurean Prince in the deal, but then another massive move was made moments later with Victor Oladipo getting sent to Houston in a package deal for Caris LeVert.

It was a very wild few minutes for basketball Twitter, but that’s just part of the reason why we all love sports.

Who won this trade?